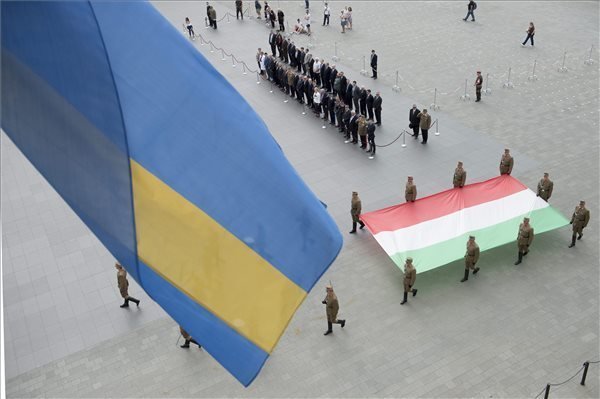 Hungarians can only leave behind the role of the victim left by Trianon if they can strengthen national cohesion in the 21st century, Speaker of Parliament László Kövér said on Thursday.

Related article:
TODAY – 95TH ANNIVERSARY OF THE TREATY OF TRIANON

Hungarians can use the resources of Christian spiritual roots, the Hungarian language, culture and history to this end, he said addressing an event marking National Cohesion Day in Hatvan, central Hungary.

Árpád Potápi, the state secretary in charge of policy for Hungarian communities abroad, said at a different commemoration in Harc, near the one-time labour camp in Recsk, that Hungarians only self-destructed in 1918 due to a lack of cohesion.

“Hungary had dissolved its army against the decisions of the great powers; Hungarians crushed themselves to dust,” he said, adding that 95 years after the signing of the Trianon peace treaty Hungarians should never forget the events that “bond them together”.

Lajos Kósa, the deputy leader of the ruling Fidesz party, said in Debrecen, eastern Hungary, that an “intact Hungary” is the opposite of the post-Trianon “truncated Hungary”. In this sense Hungary should be seen not as a Greater Hungary but intact in spirit, self-confidence and self-worth.

it is everyone’s task in Hungary today to “learn from our past and move on from the tragedy of Trianon”.

And to achieve this viable communities in the mother country and across the borders are needed, Maria Hajdu, a spokeswoman for the party’s remembrance policies, told a commemoration in Budapest.

Gábor Vona, leader of the radical nationalist Jobbik party, said at an event in Gyöngyös, in eastern Hungary, that the issue of Trianon and Hungarians living “torn away” from the motherland should be free of party politics. He said

the world must be shown that Hungarians are united on this issue.

The opposition Socialists said the day was a good occasion for establishing that Hungarians, “within the borders of Hungary and beyond, formed a single national community”. The party said all Hungarians should be considered part of the nation, regardless of where they lived, whether they “left the country for a better or freer life”.

Zsolt Gréczy, spokesman for the leftist opposition Democratic Coalition (DK), said Trianon was one of the most tragic days but hopefully the “common Europe will one day ease the grief”.

The Hungarian Liberal Party said the EU offers a good opportunity to “reunite” Hungarians peacefully and across borders and the opposition Egyutt party said the principle of “nothing about them without them” should be applied when making decisions affecting Hungarians living beyond the borders.

The Day of National Cohesion means Hungarians nurture their historical traditions and respect their heroic dead, Hungary’s President János Áder said at a commemoration in Monte San Michele on Thursday.

Visiting first world war graves on the Isonzo and Doberdo battlefields in Italy and Slovenia, Áder said this day is about Hungarians loving their country and nurturing their cultural traditions and their shared language.

In Slovenia Áder was joined by his Slovene counterpart Borut Pahor and they jointly visited the Cerje tower monument.

The Battle of Doberdo was one of the bloodiest battles of the first world war, fought in August 1916 between the Italian and Austro-Hungarian armies. Some 650,000 Hungarian soldiers died during WWI; 100,000 of them died at Doberdo.