Hungary’s national flag was hoisted in front of the Parliament building on Tuesday, in a state commemoration marking the 62nd anniversary of the anti-Soviet uprising which started on October 23, 1956.

Hungarian people wrote world history in 1956, the head of the Prime Minister’s Office said in Budapest, at a commemoration of the 1956 anti-Soviet uprising.

“The heroes of 1956 fought for a free, sovereign and independent Hungary, a country that stands independent from empires; they gave their lives for an independent Hungary that can stand up for itself and decide its own future,” Gergely Gulyás said at the memorial on Széna Square, an important site of armed resistance.

“The message of 1956 is that Hungary is capable of changing the course of history if it takes its own fate into its own hands,” he said at the 1956 memorial.

Hungarians are not the type to gamble, they do not gamble with their country, but if necessary they can fight when there is no hope, although they prefer to have heroism and common sense on their side, Prime Minister Viktor Orbán said at a state commemoration of Hungary’s anti-Soviet uprising of 1956 in front of Budapest’s House of Terror Museum on Tuesday.

Orbán said “the freedom fighters of 1956 had made a sensible decision”.

The Soviets withdrew from Austria, the Hungarian communists were focused on each other and the free West was urging Hungarians to rise up and promised help, Orbán said.

“On one side there was the hopelessness of certain decay and on the other the once-in-a-lifetime last chance,” the prime minister said. “They had to try and they did. The only way we Hungarians know how. With death-defying bravery, by putting our bad disputes behind us, in complete unity and with a pure heart.”

The foreign minister expressed gratitude “to every hero of 1956” for their role in ensuring that Hungary “can today enjoy freedom”, in a video message addressed to Hungarian communities beyond the borders and Hungarian diplomatic missions.

Hungarian people in 1956 said no to tyranny and dictatorial rule, as they also said no to intimidation, Péter Szijjártó said in his message.

“They said it was enough of others wanting to decide Hungary’s future and dictating how they should live their lives in their own country,” he said.

“The Hungarian nation is a nation of freedom fighters. This was shown in 1956, too, when Hungarian people had enough courage to rise against a vastly superior force and, despite the absence of the much awaited help from abroad, they fought until the end for Hungary’s freedom”, Szijjártó said.

“We Hungarians will never accept that others should decide about our future. We owe that to the heroes of 1956,” the minister said.

The co-leader of green opposition LMP said at the party’s commemoration of the 1956 anti-Soviet uprising that the freedom of Hungary is threatened time and again but Hungarians will not allow their rights, “voice and thoughts” to be stifled. 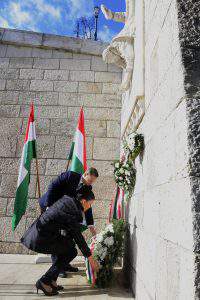 Speaking at a memorial of the revolution, László Lóránt Keresztes said that “those who opposed the regime thirty years ago have become soldiers of treason, theft and destruction”. “They have learnt and implement everything they used to fight against,” he said, adding that “the unnamed operators of the Communist regime now sit among the ranks of [ruling] Fidesz”.

The leaders of the country boast of patriotism but in reality are reinstating the Communist regime they grew up in, he said. The incumbent “Bolshevik-type” government has brought a “grievous tragedy to our nation,” the emigration of several hundreds of thousands of Hungarians, similarly to the situation after the revolution in 1956, he said.

Hungary must however “step into the 21st century” and “remove the thieves betraying and robbing our country.”

Today’s youth has to use knowledge and information instead of weapons, although the ruling power is trying to strip them of those tools, Keresztes said.

“The message of 1956 is to fight constantly for what we believe in and for those we love,” Keresztes said.

Keresztes laid a wreath with his fellow co-leader Márta Demeter at the mural commemorating Peter Mansfeld, who participated in the revolution at the age of 15 and was executed shortly after turning 18

The opposition Socialist and Párbeszéd parties laid a wreath at the statue of Hungary’s martyred Prime Minister Imre Nagy in Budapest.

Párbeszéd co-leader Gergely Karácsony told reporters after the wreath-laying ceremony that Nagy had “restored people’s faith” that Hungary could become an independent country of freedom and equality where workers could control their own factories and where freedom and equality were compatible values. 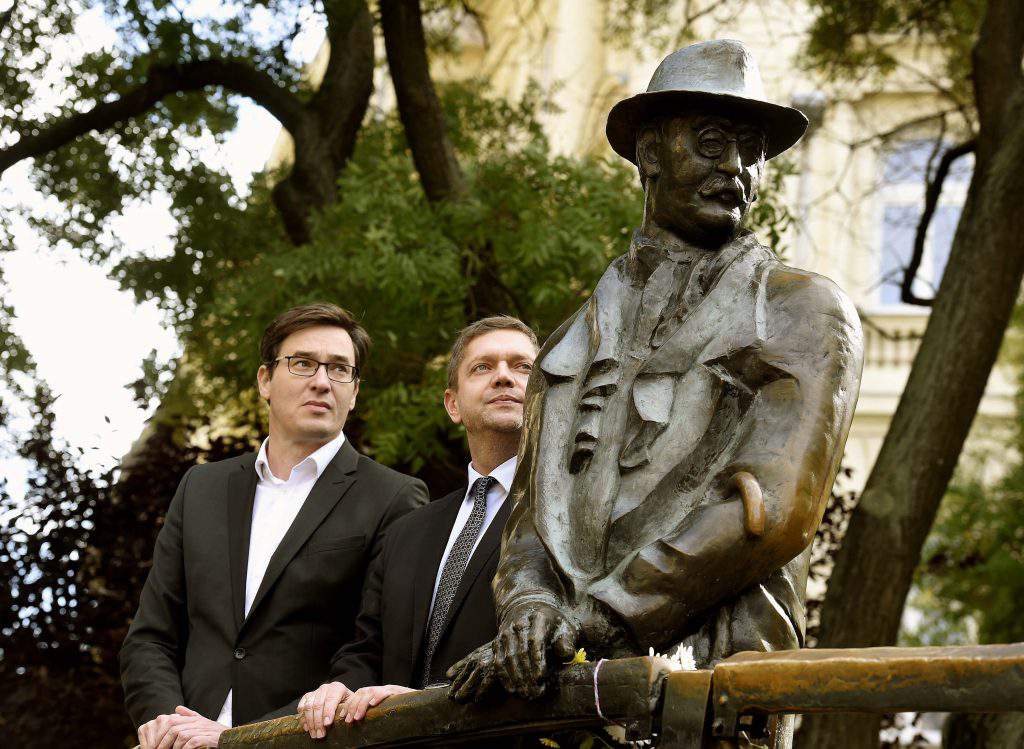 Socialist Party leader Bertalan Tóth underlined the importance of values that keep society together, adding that patriotism, which he said was one of these values, had been at the core of Nagy’s message. Nagy traded his past beliefs for the hope of the future and supported the revolution, giving his life for freedom and his country, Tóth said.

Karácsony and Tóth said their parties will do everything in their power to ensure that Nagy’s statue stays in Vértanúk Square in central Budapest.

The executive deputy head of the leftist Democratic Coalition (DK) said at the party’s commemoration of the 1956 anti-Soviet uprising that the fight in 2018 was being fought for the same goals as the revolution had been:

for the rule of law and an independent, democratic state.

Csaba Molnár, who is also an MEP of the party, spoke to the press after laying a wreath at the statue of Hungary’s martyred prime minister Imre Nagy in Budapest. He said Nagy and his companions had wanted freedom of the press, religion and association. 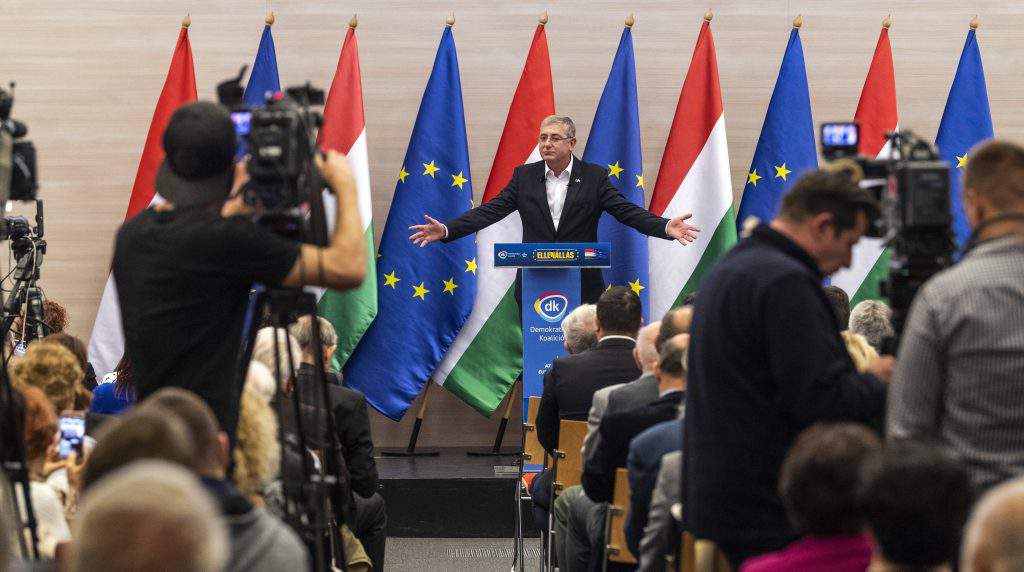 The same freedoms are missing today, Molnár said. “There is no freedom of the press, freedom of association and the Hungarian people’s fate is decided in Moscow meeting rooms,” he insisted.

Molnár said DK “has declared its resistance” because they believe in the same values as the heroes of 1956: “we cannot let a small group rob the people of freedom for their own interests.”

Molnár accused ruling Fidesz of wanting to remove Nagy’s statue from the vicinity of Parliament, “after having erased his memory from the official historical remembrance.”

DK leader Ferenc Gyurcsány told the party’s commemorative event that the reason DK had been established on October 23rd was to demonstrate that its founders were on the same side as Nagy.

One cannot be “a little bit in the opposition or very much in the opposition,” Gyurcsány said. In line with the essence of democracy, “it is not possible to stand close to [ruling] Fidesz or very far from Fidesz, only against Fidesz,” he added.

DK identifies with a European, civic and constitutional standard in line with which those in the government should be branded “crooks” without hesitation because “they are indeed crooks in a political and also a criminal sense,” he added.

Last but not least, conservative opposition Jobbik rejects all compromise with the “regime” of Prime Minister Viktor Orbán and will continue its fight to overthrow it, party leader Tamás Sneider said at an event commemorating the anniversary of the 1956 anti-Soviet uprising.

“The greatest thief in the world” is building Bolshevism in Hungary, he told the event held in front of the Hungarian Radio building. 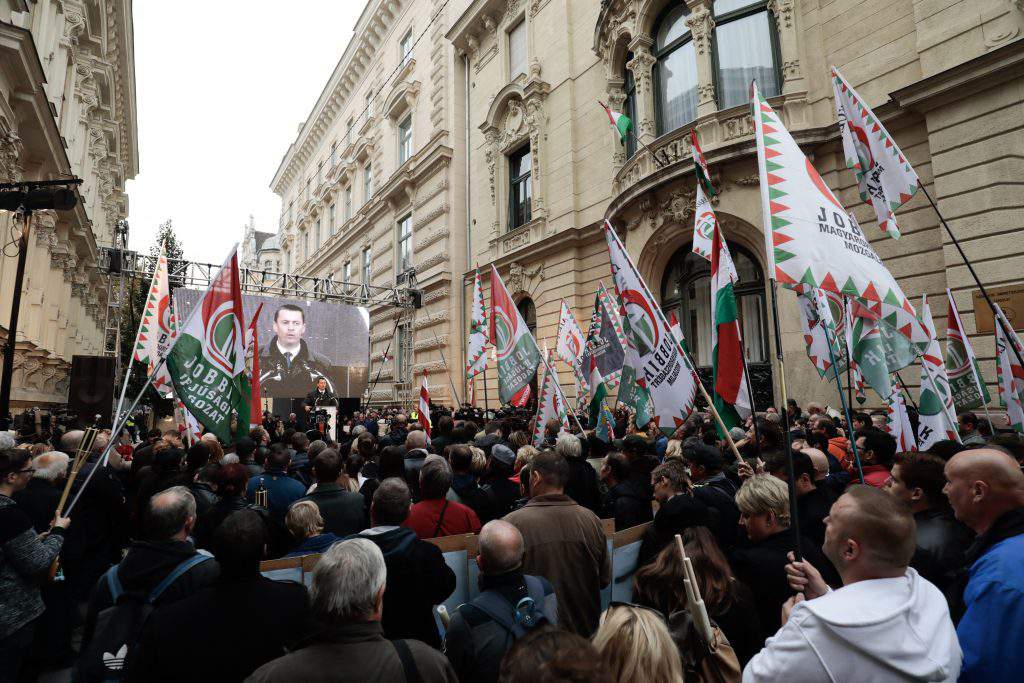 He cited several parallels between events during the Communist era and the current period, including the emigrants who left Hungary after 1956 and those that have left in recent years to work and live abroad.

Sneider said that just as the Communists had been subservient to the Soviet Union, the current prime minister was also “the most devoted servant” of Russia and President Vladimir Putin.

He said the current “regime” would not soften and only those should join Jobbik who are willing to participate in the tough fight to overthrow it.