Jobbik leader Gábor Vona told parliament that it is not enough that Orbán says he refuses the EU migrant quota system but a constitutional amendment is needed to give way to a referendum about the scheme. Vona asked Orbán to make reference to Jobbik at the next European Union summit in March and say that if the EU forces the quota system onto Hungary then Jobbik will “take people to the streets.”

The opposition Socialists said Hungarians “became downgraded” at last week’s EU summit and Orban assisted to this. Party leader József Tóbiás told parliament that despite Orbán’s claims of victory, Hungarians today have fewer rights and receive less money in Europe than before. The decision means there is danger that a two-speed Europe is approaching and this is against Hungary’s interests, he added. 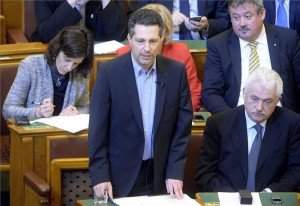 The green opposition LMP said Britain’s reform demands go against the need for a “Europe of the people”. Party co-leader András Schiffer told parliament that the EU does not function properly when it comes to security, welfare and social services, but its institutions are effective when banks’ interests are at stake. Commenting on migration, he said the issue is being mishandled the same way as it was in the past one year and all heads of state and government bear responsible for this.

The opposition Együtt said it demands that Orbán should make every effort to prevent the disintegration of the EU. Zsuzsanna Szelényi, who sits in parliament as an independent, told a press conference that the Hungarian cabinet should make efforts towards a joint European solution instead of promoting division.

The Dialogue for Hungary party said Orbán suffered three separate losses at last week’s summit. Spokesman Bence Tordai said the prime minister’s first loss was that by signing the closing declaration it was revealed that Orbán was being dishonest about the way he said he would handle migration. The second loss was that the EU-UK deal meant that “Britain’s blackmailing” of the EU succeeded, which Tordai said would have a negative impact on eastern European member states. Third, the Europe which the prime minister saw as “a Europe of strong nation states” was revealed to be “a Europe of national selfishness” which he said can now be clearly seen as being harmful for Hungary.

The Liberal Party said the restriction of the rights of the 600,000 Hungarian citizens working in the UK can in no way be interpreted as a “victory”. The party said in a statement that Britain’s EU reform deal will put Hungarians working there at a disadvantage. The Liberals also expressed concern that after the UK-EU deal, Germany, Austria and Denmark may also restrict EU migrants’ access to social benefits. The party, at the same time, welcomed Orbán’s approval of the EU’s earlier decision on migrant quotas, noting, however, that this step by the prime minister is a change of direction from the government’s anti-migrant and anti-quota campaign from earlier “which it [the government] spent billions of forints in taxpayer money on”.

Fidesz group leader Lajos Kósa said at a press conference that the policy suggested by the opposition would result in Hungarian workers being “locked out of the British labour market within two years”. He said the opposition’s demands that Hungary should not give in to Britain’s demands on restructuring its welfare system when it comes to EU migrants would have prevented the EU and the UK from reaching a deal, which would have raised anti-EU sentiment in Britain. Britain pulling out from the EU would mean that it would become very hard for EU citizens, including Hungarians, to work in that country, Kósa said. He said that with the compromise that came out of the talks, Hungarians remain free to take up jobs all across the EU.

Regarding migration, Kósa said the summit’s closing declaration, which makes reference to migrant quotas, simply states that EU rules, including the ones pertaining to mandatory quotas, must be observed by member states. This is almost the exact same statement that appeared in the declaration released after the December summit, over which Hungary and Slovakia both took legal steps, the group leader said.

On the topic of public education, Kósa said he agrees with the recent teacher protests and that they should point out problems in the education system.