Budapest (MTI) – The central bank and its foundations are doing business with offshore companies including property purchases and the bank has become a “five-star hotel for offshore knights”, the green opposition LMP said on Saturday.

LMP has proposed in parliament that the central bank should transfer its profits to the central budget but the ruling majority has rejected this, deputy group leader Erzsébet Schmuck told the press in front of the bank’s headquarters.

Schmuck said all of this was made possible by the government and ruling Fidesz’s rejection of regulations that would ban offshore companies from participating in public procurements and make them ineligible for state support.

She also accused central bank governor György Matolcsy of “unrestrained wasteful spending”, stating that large amounts of money have been transferred to companies with offshore affiliations.

Matolcsy’s actions constitute criminal activity and Prime Minister Viktor Orban should have initiated his replacement with the president, she said. 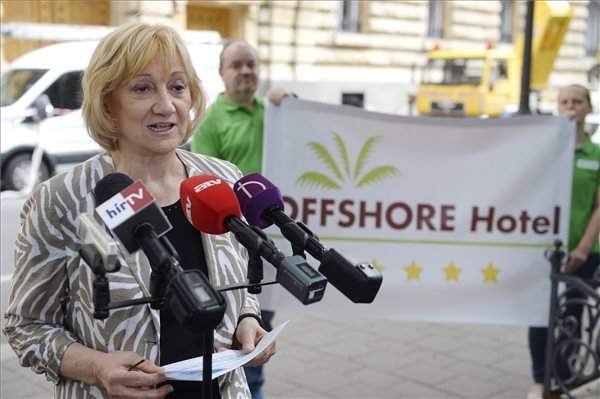 LMP proposed that all central bank foundations should be wound up.

During the press conference, LMP activists were holding a banner showing “Offshore hotel” with five stars under it.