Index.hu writes that the Day of Architecture was held last week and the Budapest Architecture Chamber awarded its standard prizes on the occasion. There are quite a few architectural awards, but this one truly fills a gap: it was created last year to replace the capital standard prize. Its goal is to popularise Budapest’s contemporary architecture, which actually needs to be advertised. Because there are great creations, we just don’t hear about them.

Last year the judges had to choose from 49 applicants, this number was 21 this year, even though the houses didn’t have to be completely new; it was enough if they were built in the last five years. In fact, most of the entries weren’t necessarily traditional houses; there were landscape architectural entries as well.

The judges chose “exciting progressive initiations” and “buildings that shape the cityscape”. Five works were awarded with the standard prize – without ranking – and two received an honourable mention. The list is quite versatile – some buildings have been known for years and some are new and unfamiliar yet.

When it comes to city development or architecture, the outer districts get discreditably less attention so great works of art like this can rouse interest. According to the judges, this a building which is much smaller in real life than it seems to be on photos, and this is specifically beneficial in a slightly suburban, mixed environment. The atrium-like structure is exciting, not to mention that the building could be the centre of a new region: it could revive the square with the church lying in front of it.

The country’s biggest passive block of flats is the pride of the 13th district. Seemingly, every stylish element is determined by energy consciousness (for instance, the separate stairway and the porch) and if architects follow this main principle, the result is a house like this. Of course this is only partially true, a passive house won’t look good from itself; it needs good architects. The designers have come up with another passive building since then, the award is due to the Meséskert Kindergarten next year.

Several news portals followed the transformation of the Kossuth Square. It’s certainly an exceptional work, which is also one of the most important architectural works of the past years. Not only for the quality of the plans and execution, but also the tense tempo. As the designer said, less than two years passed between the clear paper sheets and the inauguration. They could only keep up with this tempo with a well-organised, disciplined team. 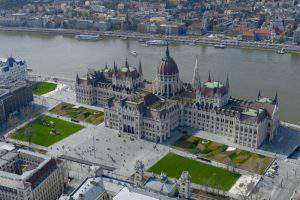 The Corvin Corner was mostly shaped by compromises. The representative of the investor emphasized that the building is the child of crisis, this is why they had to seek efficiency in every aspect. The judges remind us that the designers had to find a new function for the ground floor, because Corvin Plaza drained everything from the bottom floor of the streets in its vicinity. Miklós Mártonffy, main architect of Budapest, highlighted that at least this building blends in with the structure of the city. And what’s most important is that this is the only awarded investment which wasn’t made at state or municipal request.

This kindergarten is a very special creation. Mainly because it recycled a building that already existed. However, it wasn’t about reviving a memorial, but a standard institution in a residential area. The designers worked with the method of “collecting wishes”, which meant that they worked together with the orderer Gyermekkor Charity. The final result is a minutely detailed, lovely kindergarten and the judges believe that this is the most important factor in the case of a kindergarten.

So these were the winners of Budapest Architecture Chamber’s standard prize in 2016. Two further entries were acknowledged with honourable mentions. The judges talked less about them and mainly emphasised that designing a family house is harder than designing an office building. It is true that a mansion hidden in a small street doesn’t affect Budapest’s façade as much as a public place or a shopping centre, but if we look at how many private houses there are in the capital, then its importance is reasonable.