Coronavirus in Hungary Coronavirus vaccine in Hungary health hospital Hungarian government Hungarian healthcare system Hungary Viktor Orbán
Experts have proposed that the government support the promotion of a fourth dose of the coronavirus vaccine, which is now available for anyone after a consultation with their GP, Prime Minister Viktor Orbán said on Friday.
The fourth dose can be taken four months after the third, and it is highly recommended after six months, Orban said in an interview to public broadcaster Kossuth Rádió. The vaccine will be available on Fridays and Saturdays in January in hospitals and in major GP surgeries under a simplified system, with no need for an appointment, he said. GPs will also administer vaccines on weekends this month, he said.

Hungary’s public services and health-care system are prepared to inoculate all citizens,

he said.
Over 2 million Pfizer and 700,000 Moderna vaccines are at hand, he said.
Experts agree that Omicron is much weaker than previous variants of the virus, “but that doesn’t mean we shouldn’t protect ourselves”, Orban said, calling on Hungarians to accept the next dose whatever their vaccination status. Meanwhile, the quarantine period will be cut to seven days, and it can be exited after five days in possession of a negative test, he said.
“Last year’s Christmas was almost the way one imagines it,” he said, with families coming together, albeit “under the shadow of the pandemic”. He praised Hungary’s “fantastic hospital capacities, especially in terms of human resources”. Currently, 2,611 Covid-19 patients are hospitalised and 243 are intubated on ventilators, with over 10,000 beds available, he said. 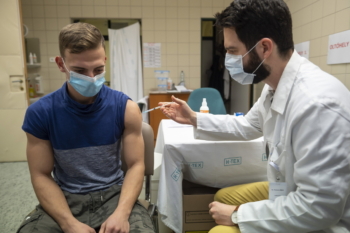