Janos Ader, speaking to journalists together with Bronislaw Komorowski after talks in Sandor Palace, underscored the position of the V4 countries of Czech Rep., Hungary, Poland and Slovakia already outlined, namely that “Russia’s military operations” not only violate international law but are creating a dangerous situation in Europe. 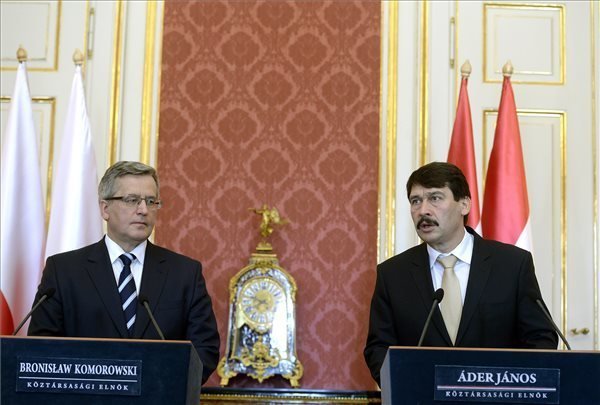 Komorowski said that Russia’s desire to take any further steps similar to the “annexation of Crimea” must be thwarted, and in order to achieve this strong sanctions are needed. 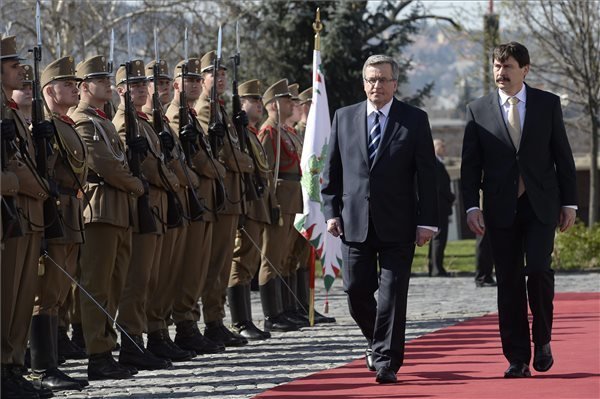 Commenting on his talks with the Polish president, Ader said three important economic issues were on the agenda.

Completing the north-south gas pipeline in the interest of securing gas supplies will moderate the energy dependence of the countries affected, he said. For the pipeline to start operating, only the section at the Slovak and Polish border must be completed, he said.

A further goal is for Poland to join the unified electricity network of the Czech Republic, Slovakia and Hungary, he said. He noted that Romania and Bulgaria have indicated their intention to join the network.

Finally, Poland and Hungary should continue their transport infrastructure developments which link the two countries in order to improve trade relations, Ader said.

On Saturday, Komorowski is to attend a Hungary-Poland friendship day in the north Hungarian city of Eger.

Komorowski announced next year’s event to be held in Katowice.