“Pyjama Man is no laughing matter for Hungary” states the article published by UEFA a few days ago. The Euro2016 introduces players in different articles and this time it was the Hungarian goalkeeper, Gábor Király, who attracted their attention, but not only with his signature baggy trousers. 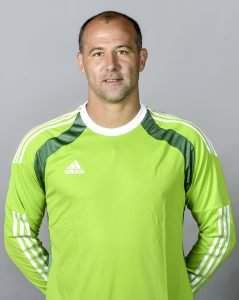 The article quotes Király: “I’m a goalkeeper, not a top model”. Szeretlekmagyarorszag.hu writes that the journalist finds our goalkeeper’s trousers funny, but they all know that he means much more to Hungarians.

Király celebrated his 40th birthday one and a half months ago. If he will be part of the Hungarian squad on Tuesday’s match against Austria, then he can be the oldest player ever to participate in UEFA European Championships.

Some of Király’s teammates were asked about him. Mihály Korhut thinks that it is very important for a defender to have an experienced goalkeeper behind his back. Richárd Guzmics said that Gábor Király trains like nobody in the younger generations and that he guides everyone from the back efficiently, as somebody with great leadership skills.

Even Bernd Storck praised the goalkeeper: “”I’ve always told him that age doesn’t matter. I don’t care if a player is young or old, if he is good. Gábor is good – he’s outstanding. He is full of confidence and is a goalkeeper with an incredible aura and charisma. He will help us to success at the EURO.”