Chile is the longest country on Earth with its 4,300-kilometer-long coastline. It has the Atacama Desert in the north, and Tierra del Fuego in the south. We are landing in the middle of the country, in Santiago de Chile, and start our journey to the southernmost point of the continent from here, on land.

The northern and central parts of Chile used to be a part of the Inca Empire, and Magellan was the first European to set foot on the land that is now Chile, in 1520. The Europeans arrived between 1536–41, and were especially drawn to the central valley, where they established the capital in 1541.

The city still resembles a Mediterranean European city: its most atmospheric place is the market hall, where we are welcomed by authentic Latin musicians, seafood specialties, and a great atmosphere.

People are playing chess in the square next to the market, the nightlife is buzzing, and its modern pedestrian streets offer everything that you would find in Europe. Santiago is an ideal starting point for heading west to the Mediterranean Valparaíso, or Viña del Mar, known for its wines, or north to the Atacama Desert, or even south to Patagonia and Tierra del Fuego, via the Chiloé Islands. And with a 5-hour flight, we can even reach the most distant and mystical island in the world, the Easter Island, which is famous for its huge stone statues, and belongs to Chile.

Then, we travel to Puerto Montt by plane, the curiosity of which is that the Pan-American Highway – crossing the entire American continent – ends here, and from here on we can only travel on minor roads, asphalt roads or in bumpy stream beds. While the Chiloé Island is a World Heritage Site: the wooden churches that the Jesuits started to build here are particularly interesting and valuable. Over a hundred one had been built by the end of the 19th century, and they are unique because only wood was used for their construction (especially cypress), and even the nails were made from wood.

We continue our journey on the board of an enormous tanker ship, among the fjords of the Andes, and volcanos of over 5000 meters and the endless Pacific Ocean come into sight. In the middle of the night, we moor in a small town called Puerto Aysén, and by travelling all day on the next day, we reach Lake Argentino to take a trip among its fascinating karst formations by motorboat.

From here, the wooden town of El Chaltén, where the world-famous steep rocks of Fitz Roy await us, is really just a stone’s throw away. 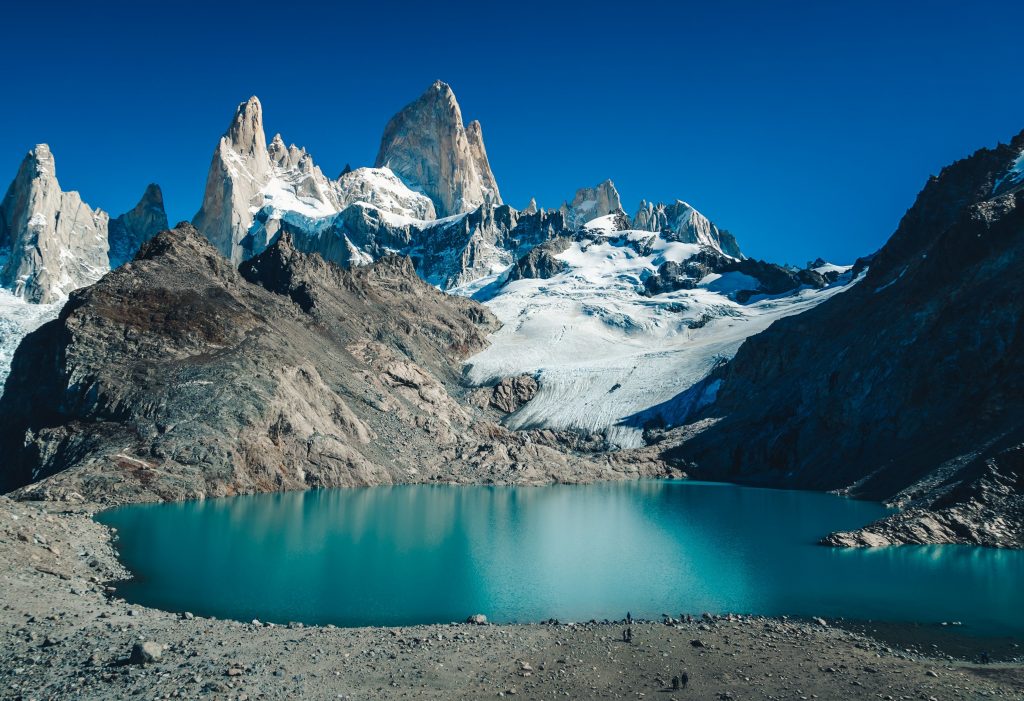 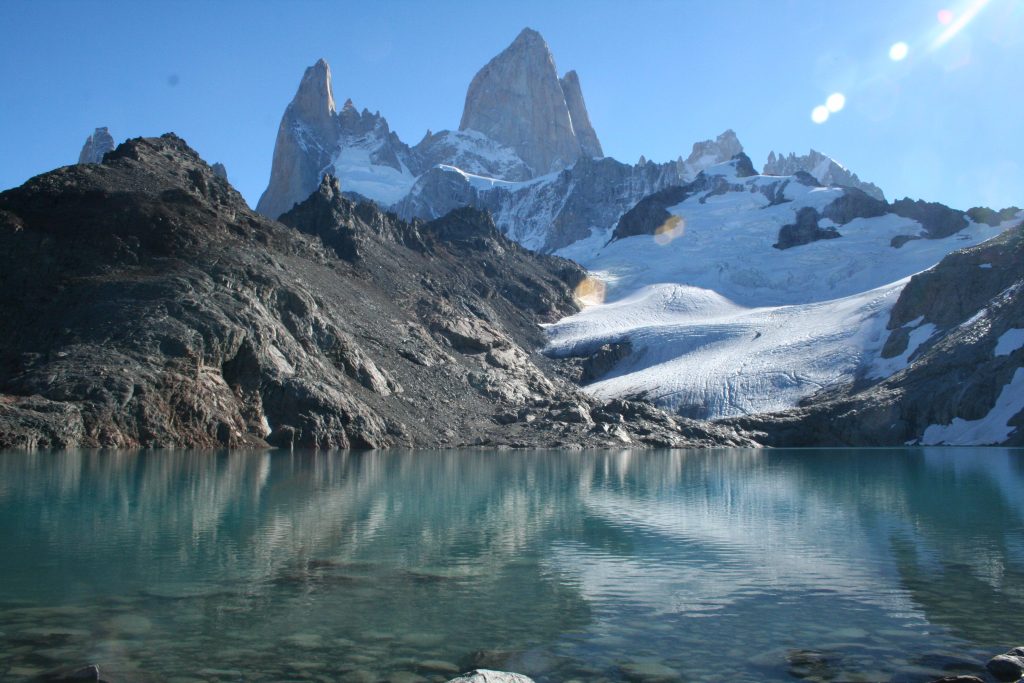 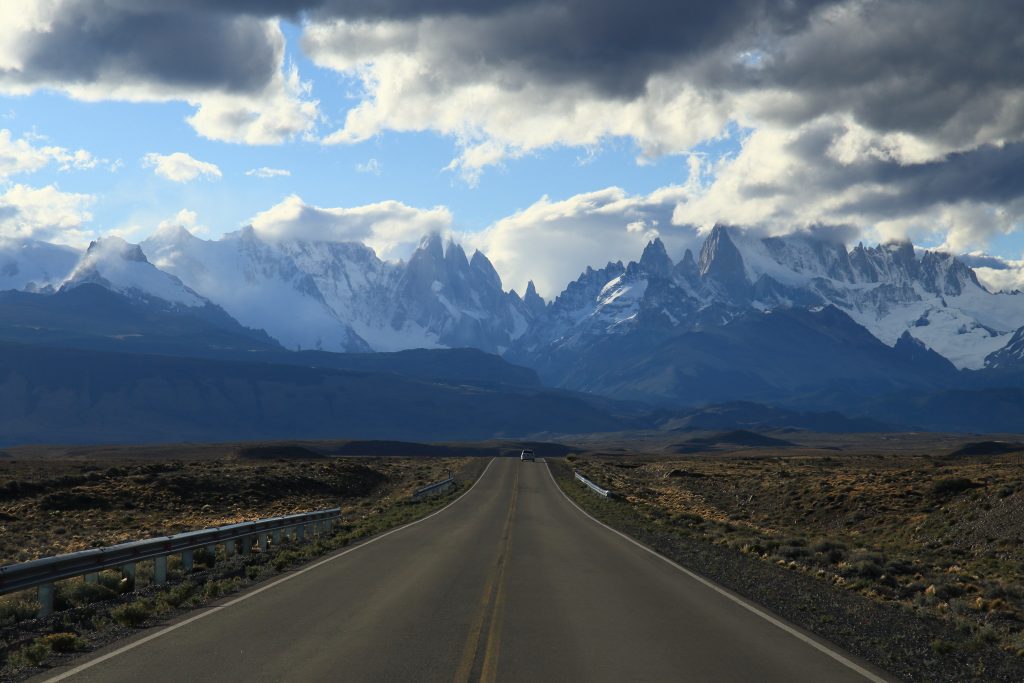 Monte Fitz Roy – meaning “smoking mountain” owing to the clouds surrounding it – is the rock climbers’ paradise: sometimes you have to wait for weeks for the weather to clear up, and to be able to climb its highly difficult walls all the way up to the peak at 3375 meters. The French alpinists – Lionel Terray and Guido Magnone – were the first to succeed it, in 1952. At that night, while we were marvelling at the peaks of Fitz Roy, and having dinner in a small local restaurant, a short, petite little Slovenian girl stumbled through the door, exhausted to the bone. Then her companions jumped up from their seats, lifted her up, and started throwing her in the air. She managed to climb up to the peak, as well.

On the next day, we continue our journey to El Calafate, Argentina, to admire a natural World Heritage Site – the Perito Moreno Glacier which considered to be the most beautiful one in the world.

El Calafate even has its own airport. Years ago, when we last visited, there was nothing here; but today, we are welcomed by numerous hotels, a town center with full infrastructure, cafes, and excellent restaurants.

The Moreno Glacier is 5-kilometer wide and 60-meter tall, and is one of the 48 glaciers found in the Los Glaciares National Park.

This ice field is, by the way, the third largest reserve of fresh water in the world. The Perito Moreno is famous because it keeps advancing and rupturing continuously, which means that large sheets of ice keep breaking off and collapsing into the water with a loud rumbling noise. If you feel like it, you can take a trip in small boats among these huge sheets of ice – the white ice glistens in all shades of blue, meanwhile its activity is continuous beside us as well.

From the glaciers we continue towards south, and get back to Chile, to reach another natural wonder: the Horns, that is, the Torres del Paine National Park. It is comprised of turquoise mountain lakes, high mountains, and glaciers, while its towers truly look like enormous horns. It has an incredibly rich wildlife – its native animals range from vicuñas and flamingos to pumas –, so it is a true wildlife paradise.

The national park was elected as the Eighth Wonder of the World in 2013.

Puerto Natales and Punta Arenas are parts of Tierra del Fuego, which is an archipelago that comprises the southernmost region of South America. And it is separated from the South American mainland by the Strait of Magellan. It received its name, meaning “Land of Fire,” because the native Indians used to make bonfires all across the area. They used to wear large snowshoes, hence the naming of Patagonia, which means „big footed.” Ushuaia – the southernmost city in the world – can be found here, although on the Argentinian side.

Even though it is located at the end of the world, it is an incredibly vibrant and youthful city, full of amazing live music bars and clubs. Many Argentinian young people move here from Buenos Aires. There is an emblematic sign in its harbor: Fin del Mundo meaning “the end of the world.” Giant tanker ships leave from here to the Antarctic, as well as tourist ships, which also start from here to the continent of ice. Sailing the Beagle Channel, we see seals and penguins, and in the evening, we chill out in the southernmost Hard Rock Cafe in the world.

On the next day we get on an airplane: via Buenos Aires, we return to Madrid, and with a change there – after the three-week-trip at the “end of the world” with full of incredible sights – we arrive back in Budapest.

It is a unique trip for those who love nature, who would like to get as far from big cities as possible, who like walking a lot and enjoy natural living spaces, who like to see unique animals in their habitats, who enjoy having drinks in small bars and talking to the locals while Manu Chao’s Clandestino plays in the background, who like cold but sunny places, and who really want to go to the end of the world to experience how good it feels to come back home.

Five Covid-19 patients have died in the past 24 hours, all of whom had underlying…