Sausages at a butcher's Source: Still from youtu.be/VX9z-KZzNMs

Budapest, nicknamed the „Spice of Europe”, tends to amaze foreigners with its irresistible gastronomic specialties. This time; however, we would like to show you some peculiarities of Hungarian cuisine. Hereby, we list the TOP10 weirdest Hungarian dishes that may shock foreigners at first sight! Which one would you dare to try?

Previously, you could learn about the most famous Hungarian gastronomic specialties, as well as the TOP 5 Hungarian dishes named after famous people. Still, there are quite a few dishes that do not even seem edible at first glance. This peculiarity inspired us to collect the TOP10 weirdest Hungarian dishes. No need to worry, their mouthwateringly delicious taste makes up for their odd look. Just be brave and give them a shot!

Bloody food may sound barbarian at first. However, blood sausage and pan-fried pig’s blood are common winter dishes in the country. Hungarians usually start their day with a big plate packed with these delicacies on the days of the traditional pig slaughter. These two dishes are usually consumed with bacon, pork, rice, onion, salt, and various herbs and spices. In addition, a few rounds of homemade pálinka are also a must on these occasions.

Besides blood, kidney and brains are also present in Hungarian cuisine. As Melodin reports, we can conclude that most of the weirdest dishes can be linked to pork intestines in Hungarian gastronomy. These organs are usually prepared in the form of special stews. Despite their unpleasant texture and smell, their taste is really appetizing. That is the reason why they are so popular among Hungarians. However; as a foreigner, the look may put you off at first sight.

The savoury aspic is a gelatinous version of the traditional Hungarian soups that are made of meat stock or broth. The dish is very popular among Hungarians who usually prepare it as pork jelly and serve it as an appetizer. This dish is usually made with pork meat and pig leftovers. In addition, celery, beets, onions, and garlic are also added occasionally. Besides Hungary, the aspic jelly is widely consumed in Croatia, Serbia, Poland, the Czech Republic, Romania, Greece, and Ukraine.

Although it sounds a bit bizarre, the rooster testicle stew is a popular dish in Hungary. It is usually served with cottage cheese chutney. Its most important ingredients are rooster testicles, onion, pepper, and tomato. The dish is seasoned with salt, pepper, cumin, paprika, bay leaf, marjoram, and garlic cream. It is often present on the menus in Hungarian restaurants, so this stew is definitely worth a try when you are in Hungary.

Although it is not common to spread fat on bread in other countries, in Hungary the bread with fat (zsíros deszka) is a popular specialty that has been consumed for centuries. This weird Hungarian dish can be easily made at home as well. All you need is white bread, fat, red onion, and some salt on top. To prepare your „zsíros deszka” (fatty board in English), you can choose from several types of fat: pork, mangalitsa, goose, or duck. Although this dish cannot be called low-calorie at all, you should definitely try it for its irresistible taste.

The potato pasta (also called the ‘grenadier mars’) is an easy budget-friendly traditional Hungarian dish. As the name suggests, its main ingredients include potato and square pasta which are accompanied by onion, Hungarian sweet paprika powder, ground black pepper, oil, and salt. The preparation of potato pasta is easy and quick.

Therefore, it is a popular comfort food that is consumed for lunch in many Hungarian homes.

The one-course meal does not necessarily look appetising for a foreigner at first glance. However, it is worth trying it because its flavour is truly divine.

As a foreigner, you might get confused by the Hungarian „főzelék” which resembles a vegetable pottage. The texture of the dish is thicker than a soup but thinner than a stew. Therefore, it may be surprising that the dish is consumed as a main course by Hungarians. The traditional homemade Hungarian főzelék comes in many flavours. The classic flavours include pumpkin, peas, beans, spinach, potato, lentils, and even mixed veggies. The latter is also called „finom főzelék” (“delicious pottage” in English). The tell-tale name certainly reflects that the Hungarian „főzelék” is worth a taste test as it has the potential to become one of favourite dishes.

Cottage cheese and chocolate?! This combo certainly sounds odd at first. However, Túró Rudi is one of the most popular desserts among Hungarians. This red-dotted sweet snack (Pöttyös) can quickly become the favorite dessert of foreigners who often stock up with túró rudi to bring them home as yummy souvenirs. If you run out of the cottage cheese curds, it is time to prepare you first homemade Túró Rudi!

The English name of the traditional Hungarian dessert would be „golden dumpling”. Before the balls of yeast dumplings are baked, they are rolled in melted butter, sugar, and crushed nuts. This special dessert is usually served with creamy vanilla custard. The Hungarian delicacy might sound unusual at first; however, it has a mouth-watering flavour. As Wikipédia reports,

Nancy Reagan made this special dessert popular in the United States when she served it at the White House for Christmas.

The Hungarian „tejbegríz” is similar to the semolina pudding. The dessert contains milk, sugar, butter, and a pinch of salt. The Hungarian dessert is usually consumed with marmalade, cocoa powder, or cinnamon sugar. Besides Hungary, different versions of this pudding-like dessert are also popular in the Czech Republic, Slovakia, Austria, Romania, Lithuania, and Syria. 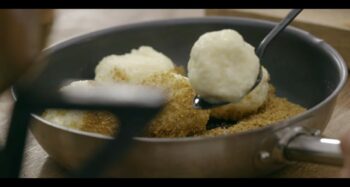