The worldview of Hungarian paganism

Historians, folklore researchers, and linguists have been studying Hungarian mythology and pre-Christian religious beliefs for centuries. Mythological ideas can be reconstructed based on folk beliefs, folk tales, legends, archaic folk prayers, and folk customs. We have already offered a glimpse into this world through several mythological creatures, legendary heroes, and sacred animals. Now, we will introduce the most important elements of ancient Hungarian paganism and its worldview.

Similarly to other European nations (e.g. the Slavs), there are no surviving Hungarian mythological texts (like the Norse sagas), but the ancient belief system can be restored to some degree with the help of the available fragmentary data. Such a reconstruction is methodologically substantiated, and the Baltic and Slavic mythologies exemplify that it is not merely a theoretical solution. The three mythologies show many similarities typologically and in terms of the level of social development since the mythological ideas were preserved in the folklore of the peasantry.

An interesting feature of the Hungarian folk belief is the extent to which the individual mythical figures or elements are connected to certain fields or genres. For example, the stratification of the underground world is only indicated by certain incantations, witch trials and folk tales serve as the main sources of Hungarian beliefs connected to witches, and the custom of equestrian burial from the period of the Hungarian conquest of the Carpathian Basin suggests that the practice of horse sacrifice was an important element of Hungarian culture. The ancient mythology and religion of our nation were linguistically, ethnically, and regionally fragmented. Hungarians’ pre-Christian religion was not institutionalised, but they worshipped certain higher beings, sought their help, and offered sacrifices to them.

The structure of the world

According to Magyar Elektronikus Könyvtár, Hungarian shamanism divided the world into three realms: the upper, the middle, and the lower or other realm. The upper realm belongs to the gods, the personified planets (Sun and Moon), and the stars. Humans populate the middle realm, but supernatural creatures (various spirits, forest and water creatures) and people with supernatural abilities (shamans, witches) can also be found here.

A central element of the Hungarian mythological worldview is the ‘sky-high tree’ or ‘tree of life’ (‘égig érő fa’ [eːgɪg eːrɜː fɑ] or ‘életfa’ [eːlɛtfɑ] in Hungarian). The image of a tree reaching up to the sky and connecting the three realms frequently appears in folk tales. Only a hero with shamanic abilities can climb this huge tree and reach the silver and gold castles of the Moon and the Sun.

In some incantations, the Moon is mentioned in the readings as a man and the Sun is associated with the feminine principle, personifying a goddess. The Moon played a major role in folk medicine, and it was thought to enhance the magical power of certain incantations. People believed that solar and lunar eclipses were caused by a mythical creature that consumes celestial bodies. In Hungarian mythology, this bird- or sometimes wolf-like being is called “markoláb”. 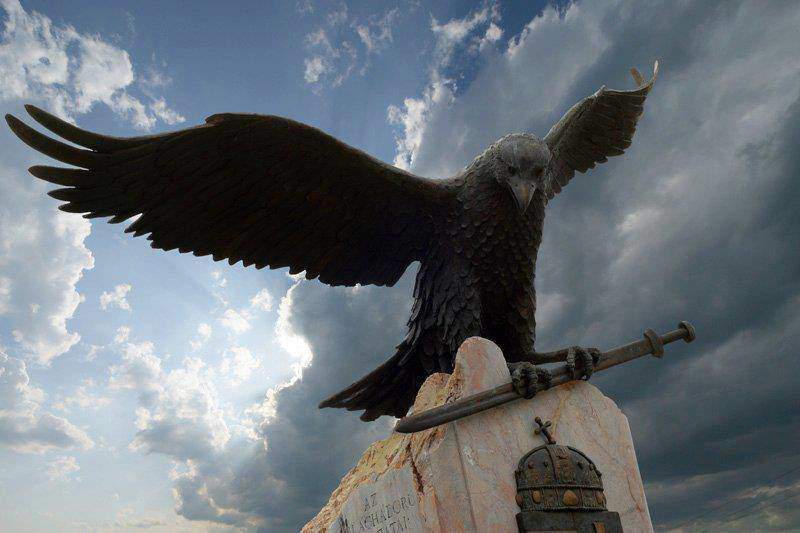 The religion of the conquering Hungarians was essentially shamanism, which is a complex belief system. The shaman mediates between the realm of souls and the realm of living people. Its role is rather diverse, involving healing, helping community members, and presenting an animal sacrifice to the gods. According to researchers, shamanism played an important role in shaping the mythological worldview of our ancestors. Elements of shaman mythology have survived for centuries as a part of the Hungarian folk faith. The Hungarian equivalent of the word ‘shaman’ is ‘táltos’ [tɑːltɒʃ] who was characteristically born with teeth, a distinctive mark, or an additional bone.

Researchers further distinguish between healers (or soothsayers, ‘javas’ [jɑvɑʃ] in Hungarian), people with supernatural healing abilities, and necromancers, who were able to make contact with the souls of the dead. Necromancers were often named after settlements, such as ‘Novaj’ [nɒvɑj], referring to a female necromancer, or ‘Csépa’ [tʃeːpɑ], denoting a male necromancer, claims Adél Vehrer. However, these figures only became a part of Hungarian folk tradition after the adoption of Christianity.

Totemism refers to the emergence of a spiritual cult of ancestors. The soul of the ancestor is believed to appear in the form of a selected animal (totem), from which the community is derived. Totemism played an important role in ancient Hungarian religion, and its existence is suggested by the origin myths, such as the turul legend and the legend of the Wondrous Stag.