Vidi took on FC Zaria Balti in the Europa League Q1, 1st leg on Thursday evening. It was the first competitive match of the new 2016/17 season. The Moldovan cup winners arrived at Felcsút for a game that was played in front of 2321. There was a presentation made on the pitch before kick off by director of football Zoltán Kovács. Hungarian international players Roland Juhász, Ádám Lang, Attila Fiola, Tamás Priskin and Balázs Dzsudzsák all received a standing ovation for their roles in Hungary’s very good performances in France this summer. 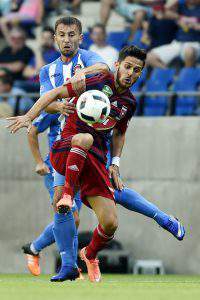 Videoton started the game well and Barczi and Géresi looked dangerous in the opening moments. However, it was the visitors who went close on 10 minutes wen Ovseannicov powerfully shot at goal from 23 meters. Keeper Kovacsik spread his legs to deny the forward, although in the end he was flagged offside. Good link up play on 18 minutes ended with Geresi receiving a the ball and finding the post from 14 meters. He went one better moments later when he intercepted a back pass and calmly stroked the ball between the keepers legs to make it 1-0. It was just what the home side needed and gave them a base to build on.
Balti’s Maxim then hit a 27 minutes free kick and Kovacsik was alert to tip the ball from under his bar for a corner. The action continued on 35 minutes when Fejes sent a ball forward, which Géresi controlled and laid the ball on for Barczi, who blasted wide of goal. The home supporters then held up a sign, which read “”Euro 2016: Well done boys, Come on Hungary!” That was a perfect message following the wonderful performances that saw Hungary top their group in France.

The start of the second half saw Picusciac fall to the ground inside the penalty area. The forward appealed for a spot kick, but was instead shown a second yellow card by the Albanian official, which resulted in the visitors going down to 10 men. Maxim again looked dangerous after 56 minutes from a free kick. His ball from close to the left touchline found the top of the bar, but keeper Kovacsik had it covered just in case.
Géresi fed Bodi with a good ball, who from a tight angle, shot at goal, but one of the Moldovan defenders slid in to clear the ball from danger. Videoton pressed forward in search of an important second goal and that arrived after 88 minutes. Nego’s ball in from the right was headed in smartly by forward Feczesin, who had earlier come on as a substitute. That doubled the lead and made it 2-0.Suljic found Bodi on the left in the closing minutes, and the new signing saw his low shot come back off the post.

The fourth official lifted up his board to show an extra 4 minutes of injury time. That was enough for the visitors to go down to 9 men when Suvorov was shown a red card after a challenge. Vidi rounded off a good performance with a third goal in the 94th minute. Pátkai played a lovely ball in for Feczesin, who calmly aimed for the bottom left corner to make it 3-0. There was no further action and the referee blew for full time.
Videoton will take a three goal lead into the second leg in Moldova next week.

Finance companies lend loans of many types, from personal loans to payday loans.…
Both members of the couple were sentenced to prison because of murder. Both their…
We and our partners use technologies, such as cookies, and collect browsing data to give you the best online experience and to personalise the content and advertising shown to you. I accept
Privacy & Cookies Policy