22nd of January – The day of the Hungarian Culture

On the 22nd of January in 1823 Ferenc Kölcsey – one of the most important literary characters in Hungarian history – completed his manuscript of the Hungarian National Anthem which is now considered his work of art. It was first mentioned as the national anthem in 1989 and since then the day when the poem was finished is called the Day of Hungarian Culture. 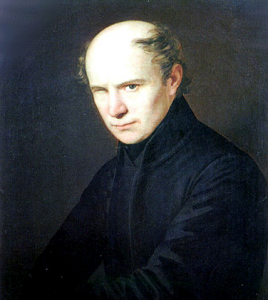 Ferenc Kölcsey (1790 –1838) was a Hungarian poet, literary critic, orator, and politician, noted for his support of the liberal current inside the Habsburg Empire. At age fifteen he made the acquaintance of Ferenc Kazinczy and adopted his linguistic reforms. Kölcsey’s strong moral sense and deep devotion to his country are reflected in his poems, his often severe but masterful literary criticism, and his funeral orations and parliamentary speeches.

According to the manuscript, kept in the National Museum, he finished his poem on the 22nd of January, 1823. The poem evoked the glory of Hungary’s past, titled “Hymnus, a’ Magyar nép zivataros századaiból” (Hymn, from the stormy centuries of the Hungarian people), and, eventually, it proved to be the most important Hungarian poem ever written.

Even before the anthem, Hungarians always had a solidary, collective prayer transmitted by folk songs. However, the strength of the togetherness wasn’t always the same and the prayers varied between different churches. 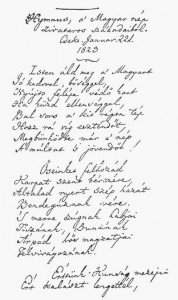 Kölcsey’s Hymnus is an ode, more specifically a hymn, which is one of the most ancient lyric genres. It is essentially a desperate nation’s prayer to God, a nation that lived through much suffering for centuries.

Kölcsey first published his poem in 1828. In 1844 Ferenc Erkel composed the music to the poem, and that’s when what later became the national anthem of Hungary, was born.

Anecdote has it that in the late 1940’s, the new Communist regime asked Zoltán Kodály and poet Gyula Illyés to write a new national anthem, for it was unacceptable to a Socialist regime that the traditional hymn started with the word “God”! Kodály and Illyés diplomatically declined the task. Kodály said “Why write a new? The old one is good enough.”

Although it was 145-years-old at the time and was regarded as such for almost as long, Kölcsey and Erkel’s collaboration was mentioned in the Hungarian constitution as the national anthem for the first time in 1989, after the proclamation of the Hungarian Republic. And since then, the day when the poem was finished is called the Day of Hungarian Culture. 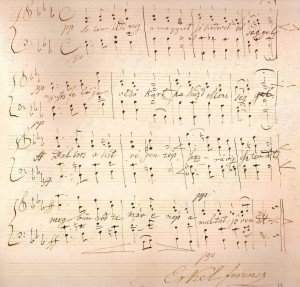 The Day of the Hungarian Culture is a day to offer cultural events and programmes that aim to hand over bits of our nation’s cultural, artistic values.

The celebration lasts for days in many cities contributing to a programme-series which include ethnographic book exhibitions, concerts, traditional craft workshops, screenings, folk music and poetry plays, anthem reciting competitions, literary contests etc. Handing over traditions to our children is one of the focuses of these programmes.

“A nation stops existing without its culture and faith.”  Laurell Kaye Hamilton