A Hungarian teenage girl was discovered by Audi

Vivien Keszthelyi (15) is one of the drivers of the Audi Sport Racing Academy 2016. At the end of the programme which takes a maximum of 3 years the drivers might have the opportunity to participate in the German Touring Car Masters (DTM), origo.hu writes.

Manager of the Audi Driving Experience, Klaus Demel, told the press about the Sport Racing Academy, which chose 3 people out of the 48 applicants – the Hungarian Vivien Keszthelyi, a driver from South Africa, and one from Dania.

Demel added that the programme’s goal is to prepare the drivers for a professional carrier; the drivers will test several cars in the Audi driving experience center in Neuburg an der Donau as well as in several European tracks.

The driving technique and technical knowledge of the participants is tested, and they also have to undergo a physical 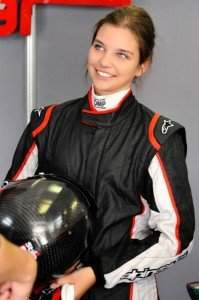 and mental training. All of them are evaluated at the end of every academic year to decide future cooperation.

Ideally, second year drivers compete in the Audi TT Cup, and take part in the GT3 in their third year driving an Audi R8 LMS. The best drivers are offered a chance at the end of the third year to participate in the DTM or in the 24 Hours of La Mans.

Demel said that Vivien is determined, talented and disciplined, and she already has racing experience; because she is quite young, Audi sees great potential in her. Csaba Bakó, race engineer of Oxxo Motorsport and Vivien Keszthelyi said that the young driver will participate in the Central European Zone Championship, driving an Audi TT Cup.

Bakó added that despite her age and car model, Vivien has a good chance of finishing in the first 8 or 10 places, and even being in the first 3 is possible. Audi will provide a complete staff for all the races.

Gyárfás Oláh, president of the Hungarian National Auto Sport Association, emphasized that they’ve been recruiting talented young drivers for years to provide them several occasions to gain racing experience. The Suzuki Swift Cup Europe is also such an event is, which Vivien has participated in the past two years.

At the end of the press conference Vivien Keszthelyi and Klaus Demel revealed the new number 77 Audi TT Cup together.