Budapest, August 20 (MTI) – Nobel laureate for literature Imre Kertesz and inventor Erno Rubik were presented with the Hungarian Order of Saint Stephen, the highest state award, at state celebrations of the August 20 national holiday on Wednesday. 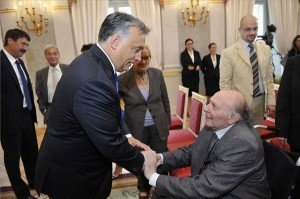 The award is given to personalities who are not only credited with a unique achievement but have given the Hungarian nation something even more significant, President Janos Ader said after handing over the awards at Sandor Palace.

Ader praised Kertesz’s oeuvre for describing “with anatomical precision” what dictatorships can do to the human soul.

He also said Rubik’s cube was an invention which required “cunning Hungarian thinking” and the cube was not just a toy, but an object which teaches creativity and is a symbol of our time.

The award was originally founded by Queen Maria Theresa in 1764. It was discontinued after 1946 and was reinstated in 2011.