Szeretlek Magyarország shared the astonishing works of Hungarian photographers who took pictures of the Namibian sky. The light of the stars and the Milky Way is so strong there that you do not even need a flashlight to navigate the desert. The team of astrophotographers had to transport very delicate equipment and travel several hundred kilometres in the savannah nights, but one look at their work will convince you that it was every bit worth it.

The expedition organised by the MAFE (Hungarian Astrophotographer Association) was two weeks long, during which time they wandered the Namibian savannah to take wonderful shots of the endless sky.

The six members of the team travelled 12 thousand kilometres for the breath-taking photos,

in Namibia, the paradise of astrophotography.

One member of the expedition was Rafael Schmall, founder of the MAFE, who also works at the Star Park of Zselice, near Kaposvár. He specialised in Astro-landscapes that show both the sky and the land. One of his images from Namibia was selected to be the astrophoto of the month by National Geographic. It was not the first time that they selected one of his works. 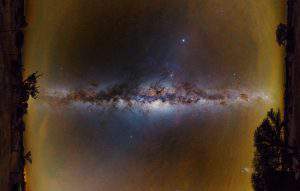 Namibia attracts those infatuated with astrophotography for two reasons. The first would be its location: as it is in the Southern hemisphere, you can observe an almost completely different sky.

Even the familiar constellations appear differently. For example, the Plough (or the Big Dipper) is barely above the horizon. The Milky Way, on the other hand, is much further up, above the observer’s head. From Namibia, you can see the Magellanic Clouds and smaller galaxies orbiting around the Milky Way.

The most convincing argument, however, is the exceptionally clean sky.

Namibia is about nine times larger than Hungary, but its population is only two million people. Therefore vast lands are basically uninhabited, and the light of the settlements cannot outshine the sky. The 1800 metres elevation above sea level and the low humidity also contribute to Namibia’s appeal.

The light of the Milky Way and the stars is so strong that they can cast a shade, and you can orientate without flashlights.

“From a photographer’s view if the quality of the Namibian sky is 100% then what we can experience in a larger Hungarian city is 10-20%, and maybe 50-60% in smaller villages” explained Rafael Schmall.

Did you get in the mood to stargaze?

The Star Park of Zselice is outstanding both in Hungary and on a world scale for the observation or photography of the night sky. Due to its low light pollution, the fainter stars are also visible, and in ideal conditions when there are no clouds or moonshine, even the smaller details of the Milky Way are perceivable.

If you would like to see more of the images, follow the MAFE facebook page to see the news about their planned photo exhibition. And if the photos are not enough for you, do not worry: just like last year, the Star Park organises meteor shower observing tours this August as well.

Seventeen U.S. states and the District of Columbia sued the administration of…

The secret ingredient would be semolina, which does not let the dough soak too much…