Budapest, May 17 (MTI) – Budapest taxi drivers on Tuesday afternoon ended the demonstration they began in the morning against ride-hailing service Uber.

The drivers blocked traffic in two lanes out of six on Elisabeth Bridge (Erzsébet híd) with a demand that Uber be banned and regulations enforced.

This is the sixth time Budapest taxi drivers have mounted a demonstration against Uber since January.

In the meantime, lawmakers are holding a debate in parliament about a government sponsored bill that seeks to ban Uber. 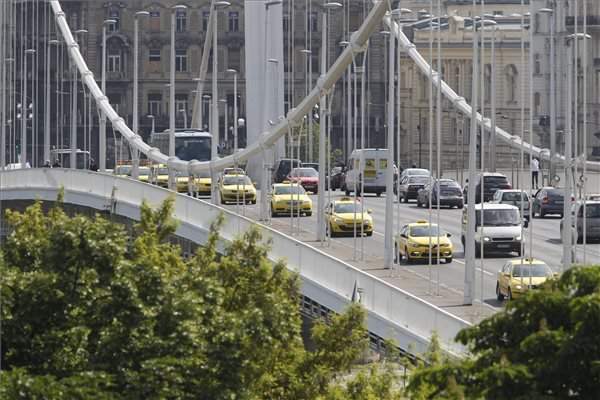 The opposition Socialists on Tuesday said they refused to support the bill and they called for Uber to be regulated properly and safely.

The leftist Democratic Coalition (DK) called for new and fair regulations to be introduced, arguing that overregulated taxi services operating at centrally fixed fees cannot compete with “unregulated” community-based services such as Uber.

Green opposition LMP proposed that centrally-regulated taxi fares should be scrapped. Speaking at a press conference, Spokesman József Gál called on Uber and government representatives to come up with a bill that could ensure that Uber pays taxes in Hungary.

The opposition Együtt (Together) party said Uber should be allowed to operate and it should be up to citizens to decide which service they want to use.

The Dialogue for Hungary (PM) party called the government’s proposal to ban Uber “incredibly stupid”. Board member Richard Barabas told a press conference that taxi drivers were demonstrating against a new technology when “the real problem” was a decree passed by the Budapest city council that he said prevented taxi companies from being competitive against Uber. He said the government should oblige Uber to conduct its business in Hungary through a local subsidiary and pay its taxes here, as well.

The Liberals suggested the government should hold talks with Budapest taxi drivers and Uber with a view to ensuring that Uber operates legally in the future.

Ruling Fidesz expressed agreement with government efforts to put the market for passenger transport in order. Fidesz said it is unacceptable that some people “drive a taxi on the black market” while others pay tax on transporting passengers legally.

If Uber or anybody else fails to observe the law, they have no place on the Hungarian passenger transport market, the ruling party said. Work has begun in recent weeks to prepare strict rules that apply to everyone. Accordingly, drivers of “black-market taxis” will be subject to high fines and their licences taken away. Meanwhile, coordinated tax and roadside checks have been started to find violators, Fidesz added.

Development ministry state secretary János Fónagy said the government supports taxi drivers who work in line with Hungarian legal regulations and pay tax. He added that parliament would debate on Tuesday afternoon legal amendments that will further sanction Uber. Anyone who operates a dispatch hub without a licence or anyone who holds a licence but provides services to drivers who do not hold a licence for passenger transport will be banned from using the relevant electronic data services, including the related website and application, for a set period.

At the same time, Fónagy said the government supports the use of smartphone taxi applications.

Under the amendment proposal, anyone who offers taxi services without a licence will get 9 penalty points and if they are repeat offenders and reach 18 penalty points, their driving licence will be taken away for six months. In the case of a first offence, the vehicle’s licence plate will be taken off for six months and for repeat offenders, the licence plate will be withdrawn for 3 months, he said.