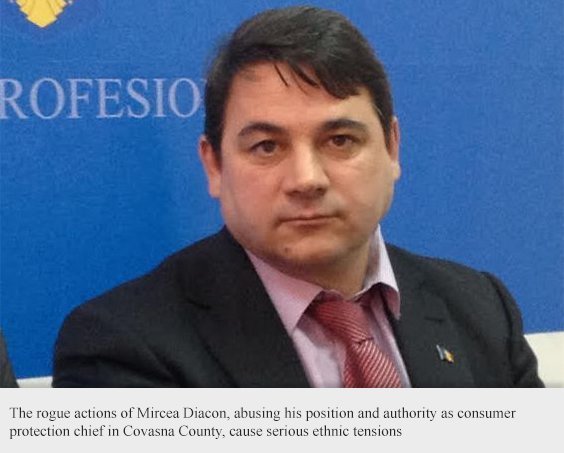 Mircea Diacon, the president of the Covasna County Consumer Protection Service is continuously abusing his position in order to discriminate and insult the ethnic Hungarian inhabitants of Covasna county.

The president of the consumer protection service created ethnic tensions in Covasna county by issuing penalty fees to commercial units that labelled their food products as „Szekler flavored”, while not penalizing units that labelled their products as „Romanian or Italian flavored” for example. The Mikó Imre Minority Rights Legal Assistance Service had written to the Office of The Prime Minister, to the Office of Romanian President and to the leadership of the Romanian Consumer Protection Service, asking for Diacon to be fired from his position due to his abuse of power.

Diacon also abused his power and position when he fixed the date of a contest for students (quoting national practice and with reference to the world day of the event) to March 15th, when he technically excluded all possible Hungarian participants from the contest (meaning 2/3rd of the pupils in Covasna county).

Another similarly grave abuse followed in August, when he visited the youth summer camp of the Transylvanian Unitarian Church, organized for 85 children, at Arcus/Árkos with the clear intent of fining them. All the children come from families with poor background, the camp being free for them. The camp had all necessary licenses, medical and otherwise. However, Diacon fined them because he noticed that the children sleep on mattress laid on the floor, there was no scale for food portions and there was no camp rule written in Romanian. (There was no Romanian participant at the camp, all the participants were Hungarian Unitarians.) He fined them in spite of the fact that according to the law, non-commercial units, as churches are, the consumer protection service is not entitled to verify.

Recently, Diacon has gotten into a pub fight, putting the prestige of the consumer protection service to risk, and subsequently trying to make it look like it was an ethnically motivated attack.

We really hope that Romania is capable of protecting its minorities and it will not tolerate its functionaries to overstep and abuse their authority.