Ferencváros won a record 23rd Hungarian Cup with a penalty-shootout victory against Vasas after the two teams had contested a 1-1 draw during 120 minutes of normal play in Budapest tonight. In a surprisingly open match Roland Varga’s first-half free-kick had put Fradi ahead but Vasas equalised in the 47th minute through Tamás Kulcsár’s fierce 14-metre drive before subsequent deadlock led to penalty-shootout heartbreak for Vasas and Kire Ristevski who missed the decisive spot kick.

In front of 14,970 fans in the Groupama Aréna this culmination of the Hungarian domestic season started with a keenly contested opening few minutes, both teams looking to stamp their authority on the game and exploit space behind the high defensive lines.

Fradi had the first chance of the match in the sixth minute when Tamás Hajnal cleverly slipped a pass to Kleinheisler who cut into space 12 metres out but in doing so was caught off-balance and couldn’t generate any power in a low shot which was safely gathered to his right by Vasas goalkeeper Gergely Nagy.

A stoic Ferencváros defence refused to give Vasas any space to shoot whenever the team from Budapest’s 13th district broke into the attacking third but the same couldn’t be said for a Vasas rearguard which gave Gergő Lovrencsics plenty of time to size up a half-cleared corner, his first-time drive arrowing just a metre or two wide of the left post from all of 25 metres.

If Vasas were having any joy at all it was emanating from the wings, Fradi right-back Emir Dilaver heading away Márk Kleisz’s right-wing cross under serious pressure from a waiting Mahir Saglik. Soon, Michael Oenning’s team started to make a little more headway in central positions too, Ristevski’s threaded through-ball releasing Kulcsár whose first-time toe-poke rebounded back out from Dénes Dibusz, the Fradi goalkeeper doing well to recover and block the follow-up shot.

At this stage the reigning Cup-holders were content to play a counter-attacking game and served them well when they created the tie’s opening goal. Vasas were perhaps fortunate to remain with all eleven men on the pitch when central defender Felix Burmeister brought down András Radó when the jet-heeled forward was almost clean through on goal, a yellow card deemed sufficient this time by referee Péter Solymosi, but it didn’t matter to Fradi once right-winger Roland Varga stepped up to thump a 30-metre free-kick low past Nagy’s outstretched right hand and into the corner of the net.

Radó was nearly the architect of a second goal just minutes later but he was penalised for a high foot on Nagy following another burst of pace to beat Vasas’ offside trap, the resultant finish from Moutari thus ruled out. Kleinheisler nearly surged through for another effort on goal after robbing a defender of the ball in his own half, only for last man Tamás Vaskó to dispossess him, before Nagy palmed behind an inventive drive from Varga at the near post as Ferencváros threatened to take a decisive lead.

Next to pose danger was centre-back Leandro when the ball landed at his foot while prostrate on the floor following a meleé from a corner but he could only flick the ball wide of the far right post from seven metres out. András Radó was causing all sorts of problems for the Vasas defence, his next contribution being to set up Kleinheisler for a blast at goal which was solidly beaten out by Nagy.

Finally it was this season’s NB I bronze-medallists’ turn to threaten, Vaskó flicking a header wide when he really should have tested the keeper before Máté Vida won the ball in midfield and glided forward, releasing teammate Saglik during a 5 versus 3 advantage but the forward’s drive after cutting inside was impressively deflected onto the crossbar by a diving Dibusz to his right. Kleisz then stung Dibusz’s palms as Vasas enjoyed their best period of the game so far, but they were unable to haul themselves back on to level terms before the half-time whistle blew.

Parity didn’t elude Vasas for much longer though as they equalised with the first couple of second-half minutes, Vida’s neat lay-off allowing Mohamed Remili to spread the play to Kulcsár in the right channel. He advanced with the luxury of almost no pressure before hammering a right-footed drive past Dibusz into the far right side of the Fradi goal.

The shock of being pegged back so early on in the second period stung Fradi into action and they arguably should have been back in front within a few minutes, Radó’s right-wing cross seemingly perfectly placed for Moutari to guide into the goal but the midfielder from the African nation of Niger somehow heading the ball over the crossbar from inside the six-yard box.

The extremely open nature of the game, rare for a national Cup final anywhere, continued unabated with the next opportunity falling to Vasas’s goalscorer when the impressive Vida slid a sweet through-ball to him, but this time the onrushing Dibusz was equal to Kulcsár’s low effort to the keeper’s left.

Moutari had also shone throughout the game but the Fradi left-winger was culpable of delaying his shot having exchanged passes with Kleinheisler and engineered a clear sight of goal on the left side of the penalty are, Nagy taking the plaudits too for coming out quickly to block the shot from a few metres out.

From the resulting Nagy’s punch rebounded straight off Michal Nalepa but fortunately for the Hungarian Under-21 international keeper the ball bounced just wide and Vasas’ good fortune continued when Varga’s rasping long-range drive struck the crossbar on its way over.

The last chance to win the game in normal time fell to Vasas substitute Benedek Murka after Ristevski had cleverly sent him clear but again the Green-and-Whites had Dibusz to thank for keeping them level. After a long stoppage for what looked like a serious injury to Hungarian international midfielder Lovrencics, a stretcher and several ambulancemen being necessary to carry him off the pitch, the match continued, albeit with neither time now ready to risk much in pursuit of a winner.

And so it proved as the final whistle went, meaning 30 minutes of extra-time. Perhaps predictably the evening’s exertions were taking their toll, tired tackles prevalent but little evident in the way of patient attacking play anymore, the most notable action coming when Kleisz selflessly hurled himself into the way of Moutari’s right-footed volley on the edge of the Vasas penalty area in the 105th minute. And so it was to a penalty shootout we went: 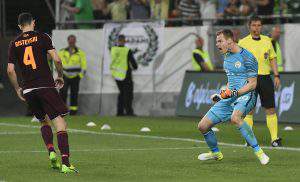