education European Union Hungarian economy Hungary Poland railway Slovakia South Korea The Czech Republic
Trade turnover between the Visegrád Group (V4) countries and South Korea grew by 40 percent over the past five years, Hungarian Prime Minister Viktor Orbán said on Thursday, expressing hope that their cooperation could soon expand to the areas of science and technology as well.
Addressing a joint press conference of the V4 leaders and South Korean President Moon Jae-in after their summit in Budapest, Orbán said the central European economies had “strong years behind them” and good prospects, while South Korea was “a world champion” in economic growth and technological development.

The prime minister referred to the summit as “a meeting of five success stories”.

Trade turnover between the V4 and South Korea even increased “in the black year for the global economy that was 2020”, reaching 20 billion US dollars for the first time, Orban said.

South Korea has a GDP of 1,600 billion dollars, while the V4 have a combined GDP of 1,100 billion dollars, Orbán noted. “If we were one country, then the V4, like Korea, could be a member of the G20,” he said.
Breaking – Korea to set up a large university campus in Budapest

after the pandemic, factories were not being reopened in the same countries where they had closed.

Most of those capacities are being taken elsewhere, “and we, the V4 have entered this competition and want to attract as big a share as possible of global investments”, Orbán said. South Korea is known for being a leader in innovation and the V4 want to take advantage of the emerging new era of the global economy, he added.

Orbán said the V4 leaders had asked Moon to

keep an eye on Hungary, the Czech Republic, Poland and Slovakia’s biggest joint project that was the construction of the high-speed rail line connecting their capitals.

The 800 km line will cut travel time between Budapest and Warsaw from 12 hours to five, he said, and expressed hope that the project would attract the interest of South Korea’s industrial sector.

He said the V4 were hopeful that their cooperation with South Korea could expand beyond the economy to the areas of science and technology as well.

Orbán said it was “an honour” for the V4 that the South Korean president had joined their summit. “This is especially so for Hungarians because we see our peoples as being related,” he said. He noted that

Hungary first established diplomatic relations with the Kingdom of Korea in 1892.

Another unique aspect of the talks, Orban said, was that they had welcomed a president who himself had fought for freedom and democracy. Thursday’s talks also touched on global issues like climate policy and the situation in Afghanistan, Orbán said. 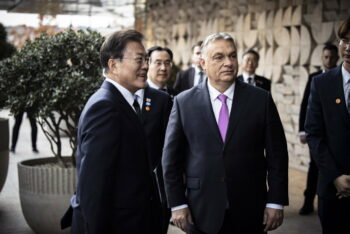