Ulaanbaatar, January 25 (MTI) – Hungary and Mongolia are both successful countries and their governments have an interest in sharing this success, the Hungarian prime minister said in Ulaanbaatar, after talks with his Mongolian counterpart.

Viktor Orbán, on a three-day official visit, held talks in the capital city with Chimediin Saikhanbileg on Monday morning.

“Over the past years, Mongolia has developed at a tremendous rate and Hungary’s economic performance is outstanding in European comparison,” Orbán told a press conference after the meeting, adding that Mongolia showed interest in jointly harnessing the two countries’ capabilities. He said his visit would help to deepen the two countries’ friendship and business cooperation.

Orbán noted that Hungary reopened its embassy in the Mongolian capital last year. “We have returned to Mongolia,” he said, noting that his delegation comprises 50 leaders of successful Hungarian businesses seeking cooperation with local companies. 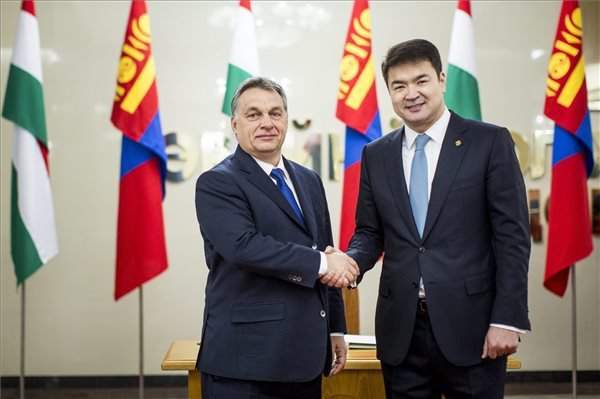 The prime minister welcomed the signing of bilateral agreements, including an agreement on Hungary’s Eximbank opening a 25 million dollar credit line to finance the revamp of a Mongolian bioplant, a protocol on reviewing contracts, as well as a letter of intent on cooperation between Eximbank and the Mongolian Development Bank.

In educational cooperation, he noted that so far 400 Mongolians have graduated at Hungarian universities and there are currently another 100 studying with Hungarian grants. Hungary wants to double the number of these grants, he said.

Orbán later met the president of the State Great Hural, Mongolia’s parliament and will meet the country’s president later in the day.