Hungary in the limelight in Dubai – Update

Globoport.hu writes that there was a conference held in Dubai about Hungarian economical and business opportunities, investments. Péter Szijjártó, Minister for Foreign Affairs and Trade also took part in the conference.

The event was organised by the Dubai Chamber of Commerce & Industry in order to introduce Hungary to local and foreign businessmen, investors. The main topic emphasized at the conference was the economical opportunities and the business atmosphere in Hungary. One of the presenters was Péter Szijjártó.

The conference was opened by Majid Saif Al Ghurair, the president of the Dubai Chamber of Commerce & Industry, followed by the opening speech of Sultan Bin Saeed Al Mansuri, Minister of Economics of the United Arab Emirates. The delegation of the Budapest Chamber of Commerce & Industry was led by Sándor Balogh, the president of the Hungarian Trade and Cultural Centre (HTCC), who has been working on the development and intensification of economical and cultural relations for years.

Péter Szijjártó, the foreign minister, told MTI on the first day of his visit to the Arab Gulf, when he met Abdullah bin Zayed Al Nahyan, that not only does central part of Europe see the migrant issue this way but the standpoint in the Gulf states is the same.

He said the handling of the root of the crisis was not progressing. “Conflicts in the Middle East are constantly deepening while the fight against the Islamic State terrorist organisation is missing a breakthrough, and European leaders are only talking about the importance of protecting the external borders while nothing of any note is happening on this score,” he said.

The minister said that Hungary and the UAE agree on the need for a settlement to the Syrian crisis based on US-Russia cooperation and enhancement of the fight against IS. At the same time, the two countries also agree on the importance of protecting borders and national sovereignty, he added.

Szijjártó said that Europe is currently defenceless. It is not enough to entrust Turkey handling of the migrant crisis on its own, he said. 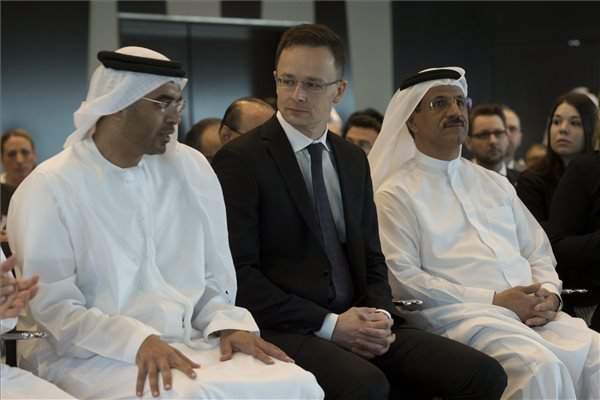 He said Hungary’s foreign ministry estimates that 30-35 million people from war and conflict zones and areas of economic deprivation could potentially cross the European Union’s southern and south-eastern borders.

Both Hungary and the UAE agree that more must be done to help refugees stay nearby their homelands so that once peace is restored they can return home, the minister said.

On trade matters, Szijjártósaid that he had met the UAE’s economy minister as well as leaders of Dubai and Abu-Dhabi’s chambers of commerce and industry. It was agreed to establish a Hungary-Dubai business forum in which 35 Hungarian companies will be represented.

On Wednesday, Szijjártó is to attend the founding session of the Hungary-UAE mixed economic committee.

The Hungarian government plans to keep the momentum of economic growth while…
The three Hungarian citizens who have flown home after staying on a Dutch cruise ship…
One of the flights of Ryanair was scheduled to take passengers to Gran Canari,…

The total value of public procurement tenders last year was 3,430 billion forints (EU…
We and our partners use technologies, such as cookies, and collect browsing data to give you the best online experience and to personalise the content and advertising shown to you. I accept
Privacy & Cookies Policy