The Hungarian Embassy marked the occasion of National Day and the anniversary of the 1848 Revolution with a lively series of celebratory events including traditional Hungarian food, music and dancing.

On March 15th, distinguished members of the Hungarian-American community and friends of Hungary gathered at the Hungarian Embassy in Washington, DC in commemoration and remembrance of the 1848 Revolution.

Speaking to attendees in both English and Hungarian, Ambassador Dr. Réka Szermerkényi began the reception’s proceedings and spoke about the importance of the legacy of 1848. She highlighted that its memory continues to inspire us to never forget that it is us, the citizens of Hungary who decide about our future. Today, most of us will instinctively connect the love of freedom with love of country. 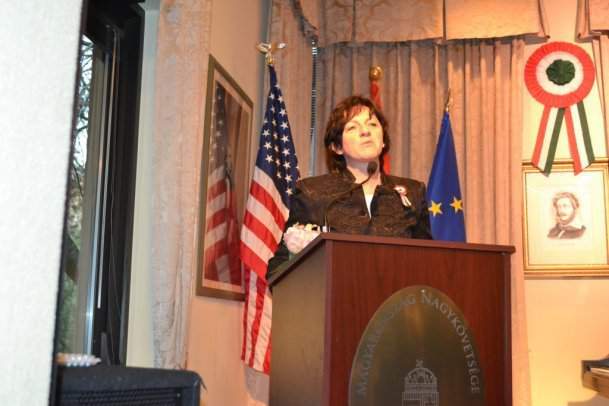 She highligthed that the values of the revolutionaries were the same values Americans cherish. The revolution of March 15th broadened avenues for political participation and previously marginalized groups were given a voice in determining the future of the nation. For the 1848 revolutionaries a commitment to national ideals was more important than ethnicity.

Hungarian dancers from the Duna Gyöngye Folk Dance Ensemble then performed for the audience. On particular stylistic display were the exuberant Csárdás dances of the 18th and 19th centuries featuring bootslapping from the men and ancient circle dances from the women. Also featured was Hungarian folk singing, courtesy of Lilla Zsuráfszky.

A reception capped the friendly and joyful evening, giving guests the opportunity to mingle with the Ambassador as well as other prominent members of the Hungarian and Hungarian-American community.