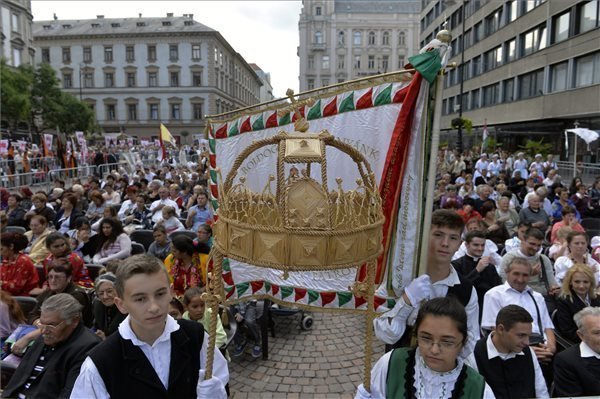 20 August – National Holiday Of The Foundation Of The Hungarian State And King Saint Stephen, The State Founder.

Stephen I (997–1038) was the last Grand Prince of the Hungarian Conquerors in the Carpathian Basin, and the first Christian king of Hungary crowned by Pope Sylvester II. King Stephen had fought for the unity of Hungary against pagan Hungarian warriors, and also for the independence of the Hungarian Kingdom against Western European Christian troops. He brought Christianity to the country and established a legal-administrative system. The 20th August is thus both a national and Christian holiday.

8.30-9.30 Ceremonial hoisting of the national flag of Hungary, followed by the graduation ceremony of military officers (1055 Budapest, Kossuth Lajos Square)

21.00-21.30 Festive fireworks (Danube banks on both Buda and Pest side between Chain Bridge and Erzsébet Bridge)

Tens of thousands of people participate in these events, especially the fireworks at night, and celebrate the 20th of August in Budapest every year.

Area of visibility and audibility

The primary area of visibility and audibility of the fireworks is along the banks of the Danube between the Chain Bridge and Erzsébet Bridge.

Both the Chain Bridge and Erzsébet Bridge will be closed to the public.

The closing of traffic will be handled by the police forces of the Budapest Police HQ from 6:00 PM until late night on the road sections concerned. Car traffic will not be allowed by the river banks. More information on http://police.hu/

The staff securing the venue will keep escape paths and evacuation points free to ensure the safe evacuation of the areas in case of emergency. Everybody is kindly requested not to stay at these locations and follow the instructions of the announcer and the security staff.

All information concerning the event will be received by a group of experts and a control staff base operated by the organizers.

One of the most important items of information is the regular weather report of the National Meteorological Service, which provides updates to the organizers on possible hazardous weather conditions, such as rainstorm with hail or high wind, winds above 45 km/h and downpour.

Spectators will be informed in a timely manner through the sound system installed along the river banks and at the adjacent venues at least 30 minutes before such weather conditions occur to ensure the safe evacuation of the areas. The organizers and the control staff will cancel the event even if the expected hazardous weather doesn`t end up happening. In this case, the announcer will provide detailed information on the process of evacuation and what to do.

The rescue system along the riverbanks has been established with the help of the National Ambulance Service (OMSZ). The organizers will provide ambulance cars and emergency ambulances along the banks of the Danube and at all event venues during the day. During the fireworks on-site ambulance stations will provide patient care services.