Budapest, November 23 (MTI) – Corruption and migration are two of the most serious problems that have overrun the country, Gabor Vona, leader of the radical nationalist Jobbik party, said on Monday during a parliamentary debate on corruption crackdown.

Political parties that had campaigned against corruption became hotbeds of corruption once they came to power, Vona said. The histories of ruling Fidesz and the Socialist Party are very much like an old mafia movie, since they were both corrupt when they were in opposition and were built on corruption, Vona said. “They sent people one message: if you want to make it, you steal.”

Vona, whose party initiated the debate, said he does not understand how the other parties expect him to investigate the case of Jobbik MEP Bela Kovacs, whose immunity was suspended last month on suspicion that he had spied for Russia against EU institutions. Vona said it would be strange if he could investigate a Russian spy case.

Vona said that rather than Kovacs’s case, it was last year’s US entry ban case that saw the US government impose entry bans on six Hungarian officials in connection with corruption allegations, that posed a real national security risk.

Vona accused the prime minister of being corrupt and surrounding himself with corrupt individuals.

Fidesz and the Socialists want to make it seem as if every other party were corrupt, Vona said, adding that the government has no reason to “drag” Jobbik into the anti-corruption debate. “You will not find a single Jobbik-run local government with corruption scandals,” he said.

“You have stolen [everything there was to steal] over the past 25 years,” Vona told Fidesz and Socialist lawmakers. “If corruption were a sport, the Socialists would win the world championship gold, but Fidesz would be Olympic gold medalists.” 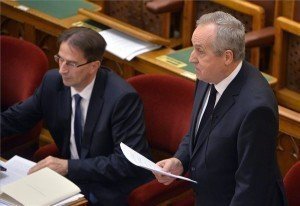 Interior ministry state secretary Karoly Kontrat said the government has taken a number of steps to eliminate corruption and noted the establishment of the National Defence Service (NVSZ) to “cleanse” public offices of corruption. The government also introduced the National Anti-Corruption Programme to assess corruption risks in state administration and the judiciary system, and to ensure increased transparency of public companies, as well as the transparency of the ownership structure of all ventures, he noted.

Kontrat said trust in the state had been shaken during the Socialists’ eight years in government, noting that the Orban government immediately declared a zero tolerance policy against corruption when it came to power in 2010.

Kontrat said the opposition was mired in corruption scandals. He noted that Socialist lawmaker Dezso Hiszekeny, a former councillor of Budapest’s 13th district, had his immunity suspended by parliament last year after he was found to have sought a bribe from a businessman who wanted to lease a shop owned by the local council.

State secretary Pal Volner noted that former Socialist deputy leader Gabor Simon had to give up his seat in parliament last year after reports that he had undeclared assets worth 240 million forints (EUR 769,000) on an Austrian bank account. He also noted that last week, a Budapest court sentenced former Socialist defence minister Ferenc Juhasz to a suspended prison term of 2 years for misappropriation of funds in allocating and selling a ministry-owned apartment to his state secretary Laszlo Fapal in 2005-2006.

Economy ministry state secretary Andras Tallai said the government had implemented a number of measures to whiten the economy such as the installation of online cash registers and electronic road tolls, noting that the opposition did not vote for either of those two measures. 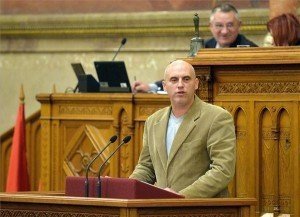 Socialist leader Jozsef Tobias said corruption in Hungary has now been written into law. He said the government, citing the safety and health of families had reorganised the gambling sector and passed a law on the “tobacconist scam”, he said, referring to the national concession of tobacco sales in 2013.

Tobias criticised the government for conducting “more than half” of the public procurement processes without open tenders, which he said results in more “suspicious cases” than have come up over the past 20 years.

Socialist MP Gergely Barandy said the government in 2012 risked Hungary’s diplomatic credibility by transferring Azerbaijani national Ramil Sahib Safarov, sentenced to life in prison for murdering his Armenian fellow-soldier with an axe in 2004, to his home country.

Bernadett Szel of the green opposition LMP party said the policies of Fidesz and the co-ruling Christian Democrats had led to a rise in the working poor, an increase in emigration and Hungary’s agriculture sector is in shambles. She said corruption is given precedence over governing the country.