LMP To Ask President Not To Sign Law On Paks Loan 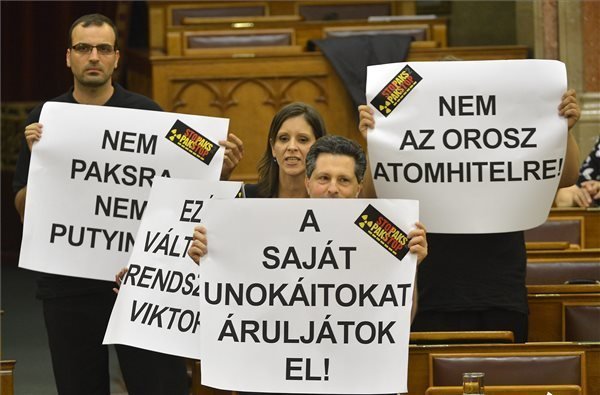 Budapest, June 23 (MTI) – If parliament approves the bill on a loan with Russia for the expansion of the Paks nuclear plant in a final vote on Monday, the opposition LMP party will ask President Janos Ader not to sign the law, the party’s co-chair, told a press conference today.

If the president signs the law, the party will ask the ombudsman to appeal to the Constitutional Court, Bernadett Szel said.

The vote is scheduled to take place at an extraordinary session in the afternoon. In line with economy minister Mihaly Varga’s proposal, Hungary would take out a state loan of maximum 10 billion euros from Russia for the project.

Szel said the government wants to take out one of the biggest foreign currency loans in Hungary’s history that involves high exchange rate risk.

The project, which includes adding two new blocks to the existing four at the Paks plant in central Hungary under a contract concluded with Russia in January, is absolutely non-transparent, Szel added.

The expansion will not help reduce Hungary’s energy dependence and, contrary to promises, it will result an electricity price increase, she said.