Budapest, March 15 (MTI) – Life in today’s Hungary was shaped by the intellectual heirs of the revolutions of 1848 and 1956, Prime Minister Viktor Orbán said in front of Budapest’s National Museum on Tuesday. Today, 168 years after European peoples fought for their freedom, “Europe, our shared home,” is not free, he said. The need to face the past and the future alike and act for the nation was the message of the 1848/49 anti-Habsburg revolution for succeeding generations, Budapest Mayor Istvan Tarlós said in the offical celebration.

Speaking at a state commemoration of Hungary’s anti-Habsburg revolution of 1848/49, the prime minister said that the first step towards stopping mass migration into Europe is “stopping Brussels”. Hungary will not allow Brussels to “place itself above the law”, Orbán insisted.

“We will not allow [Brussels] to force onto us the fruits of its cosmopolitan migration policy. We are not going to import crime, terrorism, homophobia or anti-Semitism that sets synagogues on fire … There will not be any gangs hunting our wives and daughters.”

Orbán described the EU’s refugee policy as one that would first decide who Hungary has to admit, then force the state to “serve foreigners in our own homeland” after which “we find ourselves locked out of our own country.”

He reiterated that Hungary rejects the European Union’s refugee resettlement scheme, adding that Hungary would not give in to “blackmail or threats” from Brussels.

“It is time to sound the alarm bells and gather allies” against the migrant quota scheme, the prime minister said.

“We call on Hungarian citizens, regardless of party preference, and European nations to unite” against refugee relocation, he said.

Orbán said mass migration is presented as a humanitarian issue, but its real nature is “invasive”. He said that the discussions on migrant relocation would begin with talks on resettling “a couple of hundred or a thousand” people, adding at the same time that no European leader “would be willing to swear” today that there would not be a need to later resettle tens or hundreds of thousands of migrants.

“Herds of incurable human rights warriors” feel an “insurmountable urge” to lecture Hungary on the refugee crisis, he said.

Orbán said Hungary has a history of taking in people from different cultures. Anyone who had arrived in Hungary “as a new family member, ally or refugee” was taken in and found a new home in Hungary, he said. People who attempted to force their way into the country or came with the intention to change it, however, were met with resistance.

He said that 168 years after European peoples fought for their freedom, “Europe, our shared home,” is not free. “Freedom begins with speaking the truth, but today we are not allowed to speak the truth in Europe,” the prime minister said. “Even if it is made of silk, a muzzle is still a muzzle.”

Europeans are not allowed to say that “Brussels is slowly eating away at our sovereignty and planning a United States of Europe” which it does not have a mandate to do, Orbán said.

The prime minister said life in today’s Hungary was shaped by the intellectual heirs of the revolutions of 1848 and 1956.

“The nation’s political, economic and intellectual life is still governed by the heartbeat of revolution.”

Orbán said the revolution of 1848/49 was “Hungarian to the core” by being inspiring, sober, glorious but moderate at the same time. The prime minister praised the citizens, soldiers, lawyers, writers, doctors, farmers and patriotic workers who participated in the revolution.

Orbán also greeted Polish citizens who had travelled to Budapest to take part in the commemorations. “Just as we have over the course of our shared history, we [Hungarians] stand by you once again in the fight for your country’s freedom and independence,” the prime minister told the Poles in attendance. “‘More respect to Poland!’ is our joint message for Brussels,” he said.

“The book of fate says that the concealed and faceless powers of the world will do away with everything that is unique, exceptional, ancient and national,” Orban said in his closing remarks. “If we accept this … we will be swallowed up by the United States of Europe.” The prime minister said Hungary’s task is now to “defeat, rewrite and change the fate that has been written for us.”

Hungary must face past and future alike to act for nation, says Tarlós

Speaking at the state commemoration at the National Museum, the mayor said the real test of courage in our time lies in the ability to adapt to the present. Those with real courage can sense impending threats and take on the necessary task of guarding the border and watching over the “boundless shared homeland”, he added.

Tarlós said those with real courage do not selfishly crave the love of the people but will do what they have to do based on their trust. 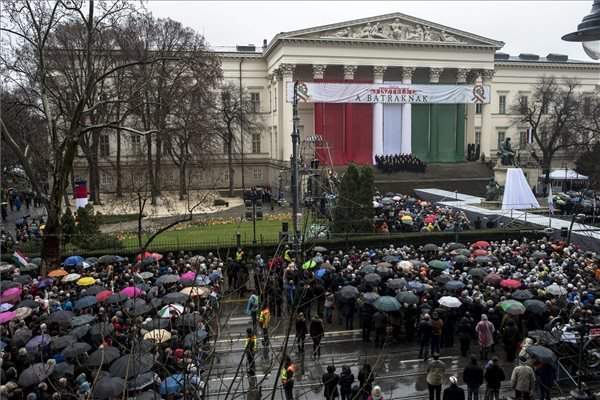 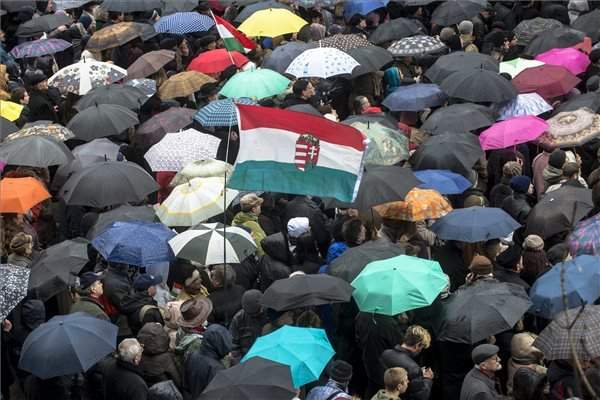 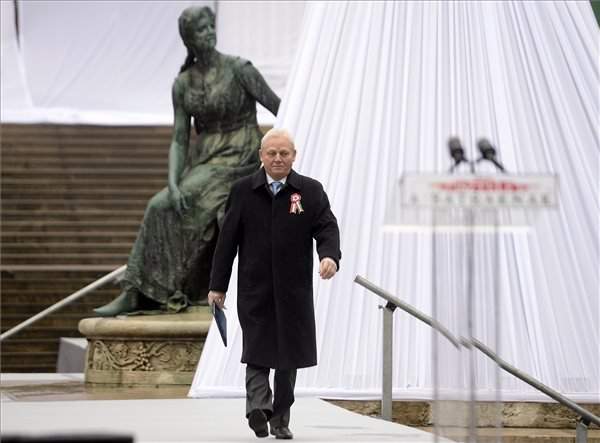 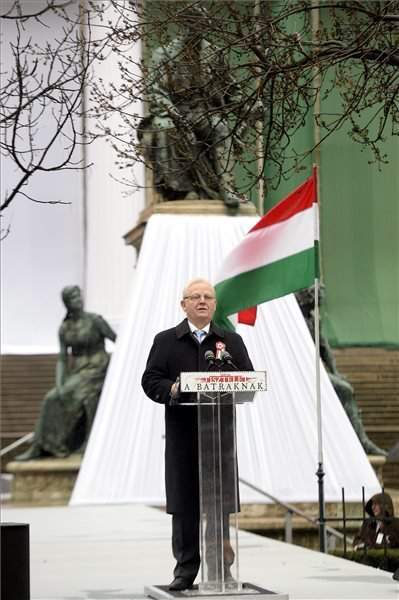 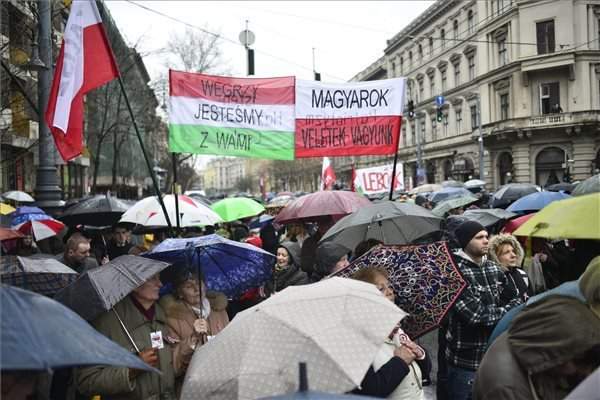