Budapest, October 13 (MTI) – The Kúria, Hungary’s supreme court, on Thursday rehabilitated Imre Nagy, prime minister at the time of the anti-Soviet revolt of 1956, and other leaders sentenced in 1958.

Through its ruling, the Kúria upheld a declaration by the Hungarian parliament in 2000. At that time, the national assembly declared void all sentences handed under rules of communist retaliation in general, but ruled that the Kúria should rehabilitate the victims upon individual request.

“The Kúria pays tribute to the victims”, István Kónya, deputy head of the supreme court, said in his justification attached to the decision. 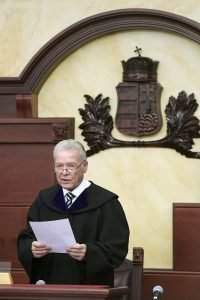 Kónya also said that there were another 200 cases before the court, in which the Kúria was requested to similarly rehabilitate people sentenced for their part in 1956 developments.

Imre Nagy, Miklós Gimes and Pál Maléter were sentenced to death on June 15, 1958, while many others were imprisoned.