Gergely Karácsony, co-leader of opposition Párbeszéd, will lead the party’s national list for next spring’s general election, the party decided at its congress on Saturday.

Karácsony, who is mayor of Budapest, told a subsequent press conference streamed on Facebook that he would only “be leading the party list symbolically” as he has no ambition to serve as a member of parliament.

“If the opposition wins and there is a change of government I will be preparing to work as the mayor of Budapest in alliance with the new cabinet,” he said.

Speaking at the same press conference, Péter Márki-Zay, the opposition alliance’s prime ministerial candidate, said cooperation among opposition parties was free of any tension with their unity becoming stronger day by day.

“As a centre-right Christian, Párbeszéd’s programme of a fair, green Hungary advocating solidarity is not in conflict with my set of values,” he said.

Tímea Szabó, the other leader of Párbeszéd and its group leader, said that, if elected into Hungary’s next government, the party would more strongly represent leftist and green values “which Orbán’s incumbent government is trampling on”.

“Viktor Orbán’s government is afraid, tells lies and incites hatred because they are well aware that the game will be over for them next April”, Szabó said.

“Led by Péter Márki-Zay, we will set up a transparent and honest government that pays attention to the rights of workers, to single mothers and those living in poverty,” she said. 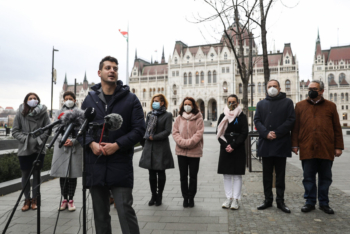