Minister: border protection is not a human rights issue!

Asia European Union Hungary Hungary border control migration
It is high time for Brussels to realise that central Asia is key to Europe’s security, as 30,000-35,000 migrants leave Afghanistan every day, Foreign Minister Péter Szijjártó said on Wednesday.
Szijjártó told a joint press conference with Tajik counterpart Sirojiddin Muhriddin that if the countries of Central Asia decided to open their borders and allow migrants to pass through, Europe would face an even larger wave of migrants than the one experienced in 2015.

“As a result, human rights lectures should be finally abandoned and real support should be provided to the countries neighbouring Afghanistan in order to help them protect their own borders,” he said. “We propose that the European Union at least double the 20 million euros allocated for this purpose and that we transfer this support to the countries of the region as soon as possible,” he added.
50 Czech policemen help Hungary’s border patrol

Tajikistan is protecting 1,344 kilometres of border with Afghanistan and it is high time that the EU provides effective support,

“We can be thankful to the Tajiks that despite the pressure exercised by international organisations and NGOs, they keep their borders closed,” he said. “Had they not done so, many hundreds of thousands of migrants would be knocking on the southen borders of Hungary along the Western Balkans route,” he added.
Szijjártó said it was high time that Europe, Brussels and NGOs understand that border protection is not a human rights issue but a security issue. If this does not become a generally accepted position, Europe’s security will face serious challenges, he added. 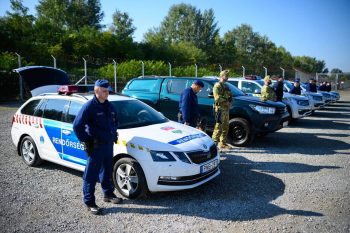