A monument to the late Hungarian archbishop József Mindszenty was inaugurated in Krakow, in a ceremony attended by deputy House Speaker Sándor Lezsák, on Saturday.

In his address, Lezsák said that “Mindszenty’s drama was a symbol of Hungary’s history in the 20th century, the freedom fight of Christian countries, as well as the shared fate of the Polish and Hungarian nations”.

He also referred to Poland’s cardinal Stefan Wyszynski, who had played a similar, anti-communist role to that of Mindszenty.

Mindszenty (1892-1975) was appointed head of the Hungarian Catholic Church after the second world war, but sentenced to life imprisonment on false charges by the communist regime in 1948. He took refuge at the US embassy after the 1956 uprising, and lived there until 1971 when he was allowed to leave the country for Austria.

The monument was donated by expatriate oppositionist Tibor Pakh, and sculpted by Sándor Kligl. 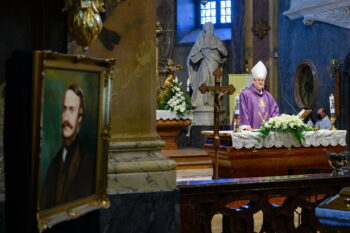