Orbán: preventive efforts could go on until the next general election in 2022

Speaking about Europe, Orbán said the continent “can even hardly see the back” of the United States and China, the two countries running a technological competition against one another on a military-economic basis.

“We can and we will protect the health and lives of people,” the prime minister said. “Nearly two million people gave their positions in the national consultation (survey) and determined how to proceed… Hungary must keep going!” he added. He insisted that protection must simultaneously be aimed at saving the lives of the elderly, and keeping kindergartens, schools, and workplaces open.

Hungary has a “fully prepared health care system, conscientious experts, and broad cooperation” which will ensure successful protection against the second wave of coronavirus, Orbán said, adding that success was also conditional on “everybody’s observing the rules”.

preventive efforts could go on until the next general election in spring 2022.

He suggested that Hungary should acquire “a few million doses of the vaccine” expected to be completed next year and vaccinate people in a scheduled manner. He noted that nurses were being given a 70 percent payrise, adding that “a breakthrough is necessary in terms of doctors’ salaries”.

Concerning the economy, Orbán said that the government was working “not only to maintain the level reached during the past ten years but ensure that everybody can take a step further each year”. “Hungary cannot shrink, like a snail into its shell, but proceed, grow, expand, and rise like a rhapsody by Liszt,” he said.

The prime minister said he hoped Hungary would arrive at the 2020 elections “having successfully fenced off the epidemic, beefed up its health care, with an economic growth never seen before, full employment, a greater home construction boom than before and 13th month pensions being reintroduced.”

“Meanwhile, we will not have a moment of rest because of the Left wing,”

Orbán said, and insisted that the leftist parties were “busy undermining, weakening the national forces and cooperation, shooting at politicians and experts coordinating prevention against the epidemic, and telling on the country in Brussels,” Orbán said. “One does not know whether to laugh or cry,” he said, but warned that “our freedom will be at stake in 2022”.

Sovereign states are most jeopardised by “a global network advocating an open society, aimed at eliminating national structures, Orbán said, and insisted that

“George Soros‘s network… is aimed at building open societies of a mixed ethnicity through accelerating migration and dismantling national decision making competencies, and handing over those competencies to a global elite”.

That global elite “would not allow policies conflicting with its own interests in central Europe”, he added.

The global elite will “apply the same strategy in Hungary in the 2022 election campaign as in this year’s presidential election in Poland… using the repeatedly failed Left led by Ferenc Gyurcsány and having Momentum as its youth arm,”

Orbán said. “They are forces of the past that destroyed the country once before,” he said, adding that “the opposition no longer has parties with an independent will; they have been minced and processed like meat into sausage”. Once independent communities have now become a “leftist people’s party serving the Soros-network”, now preparing for a “decisive battle” in 2022, “backed by the international media, Brussels bureaucrats, and pseudo-civil NGOs”.

“We should have no doubts, they will do everything for power and money. It is time we deployed forces. After hard years of government we will have to return to the battleground of the election… a major battle awaits us in 2022. Get prepared!” the prime minister said in his article.

The US dollar “has knocked out” the euro, the European Union has isolated itself from Russian markets by…

The US dollar “has knocked out” the euro, the European Union has isolated itself from Russian markets by sanctions and has been purchasing major technologies from its rivals, Orbán said.

The West has lost its appeal in central Europe and “our way of life does not appear to be desirable to Westeners”, Orbán said, adding that “Europe must be kept together in the years to come so that there seems to be no chance of reversing this historical trend”.

Orbán said that in this “stalemate”, countries in Europe must find a way to work together “until the future of Europe is decided in Italy, for the right or the left”.

He said that the struggle for intellectual sovereignty and intellectual freedom launched several years ago in Baile Tusnad (Tusnádfürdő) has begun to bear fruits, adding that the basis of those opposing “political correctness, the liberal doctrine” is becoming wider.

“But no matter how velvety the tone is in which we speak about illiberal democracy, the concept still rings awful in German and Anglo-Saxon ears; so far,” Orbán said.

The doctrine that “democracy can only be liberal” no longer stands, Orbán said, adding that the conservative and Christian Democratic parties will now have a chance “to free themselves from the life-threatening embrace of the liberals”.

Statements like “there is no such thing as an illiberal democracy” will from now on be recorded “in the book of political nonsense” no matter at what high level these statements are made, Orbán said.

He said that the approach was wrong that the separation of powers, civil and political freedoms, the protection of private property and the rule of law can only be achieved through the means of liberal democracy.

The principles of Christian Democrat and liberal ideologies are in stark contrast, he said. “The target of the liberals’ attacks are everything what are most important to us: the nation, family and religious traditions,” Orbán said.

Christian Democrats reject the liberal foreign policy which would expect from every country to accept liberal democracy, he said.

“That is why I keep my fingers crossed for Donald Trump’s victory, because we know well the foreign policy of American Democrat governments based on moral imperialism. We tasted it, even if forced. It did not taste good, so we do not want another serving of it,” Orbán said.

Christian Democrats and liberals do not see eye to eye over the issue of subsidiarity, either, Orbán said, and insisted that “while liberals think it good to transfer as many national governmental powers to international agencies, Christian Democrats know that such organisations are invariable likely to be arbitrary and vulnerable to influences such as that of the Soros network”. “Citizens of Europe’s nations realised early on that today’s European institutions do not serve them but the interests of figures like George Soros,” he added.

Orbán also pointed to a clash between liberals and conservatives concerning migration, and said that “liberals think that mass immigration is nothing to be feared, that terrorism, crime, anti-Semitism or the emergence of parallel societies are but transient problems; conservatives and Christian Democrats, however, reject social and human experiments of uncertain outcome” and reject “risking chronic intercultural tension and violence”.

On the subject of education, Orbán said that conservatives would focus on “distinct national traditions” and raise patriots and wish schools “to confirm children in their sexual identities determined by God and given to them at birth”. Schools should “help girls become hard-working and respectable women and boys become men able to ensure security and support their families”, he added.

Schools should protect the values and ideals of the family, and “keep gender ideology and the rainbow propaganda away from minors”, Orbán said.

Liberals may see that attitude “as the dark Middle Ages” or “clerical fascism”, Orbán said, but added that “Christian Democrats think that justice, public morals and the common good have not needed religion, Biblical traditions and the churches more than now for centuries”.

According to Orbán, the “only chance for Christian democracy is to stand up and declare the following four sentences that could turn the whole of Europe’s politics over: our national and Christian principles are not liberal; they were created before liberalism; they are antagonistic with liberalism; liberalism is today destroying them”. 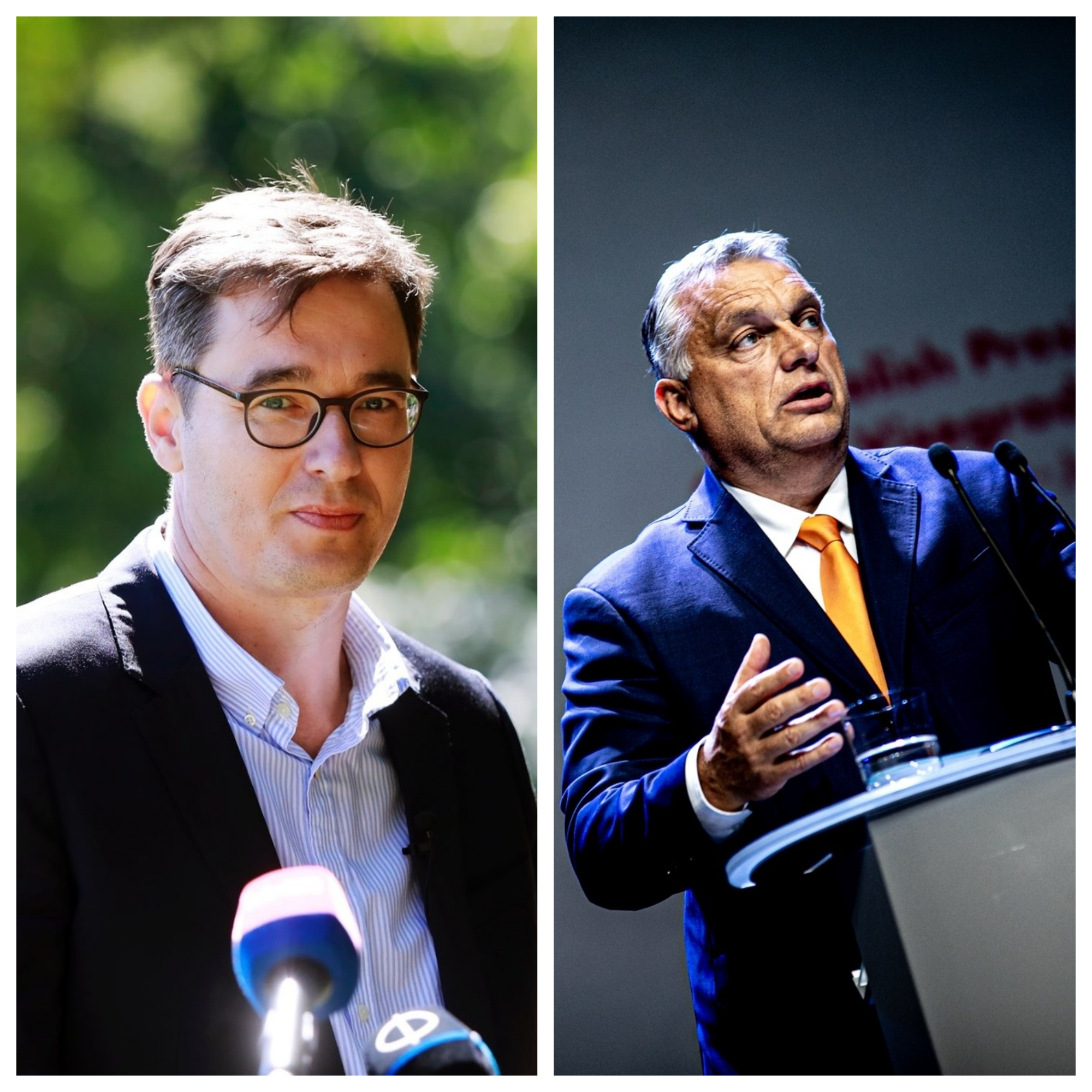