Budapest (MTI) – Prime Minister Viktor Orbán spoke at the dedication of an organ in the German-speaking Reformed church in Budapest’s Hold Street on Sunday. 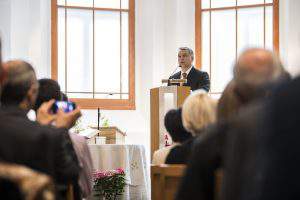 Orbán said he saw in the church the embodiment of a diverse community, which, “held together with the glue of their common faith”, could build a strong spiritual home even after the world wars and the expulsion of Germans after WWII.

Human Resources Minister Zoltán Balog said the Austrian, German, Swiss, Dutch and Danish immigrants who founded the German-speaking congregation 158 year ago had passed on their heritage of preaching the gospel, doing charity work and showing civic responsibility to today’s congregation.

“This queen of the instruments will be a servant girl here, a witness serving the preaching of the gospel,” Balog said.

At the end of the ceremony, Orbán presented a state award to German lawyer Jurgen Illing, who was instrumental in organising the renovation of the church 15 years earlier.

Balog noted that the church’s bell, originally donated by Kaiser Wilhelm II, but stolen in 1945, had been replaced in 2002 with a donation from the prime minister and his wife Anikó Lévai.

The 1,130-pipe organ was designed and built on the basis of historical examples by organ builder Attila Faragó and AerisOrgona. The organist László Fassang played at the dedication.