Daegu, South Korea (MTI) – Without sufficient water supply, there will be no sustainable development in the world, President Janos Ader said, opening the 7th World Water Forum in Daegu on Sunday. 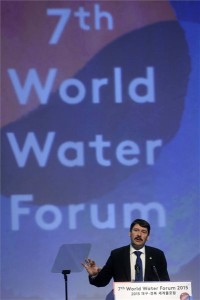 In his speech, the president proposed drafting a comprehensive international agreement on the coordinated use of common catchment areas.

As local and regional solutions are no longer sufficient for resolving water crises, the international community should set up a global water management organisation under the auspices of the United Nations, he said.

Mankind has upset the balance of the Earth, Ader said, adding that in ten years’ time two billion people would face shortage of water globally.

The president noted that in its latest annual report the World Economic Forum identified the water crisis as the biggest risk threatening the world.

To prevent the situation from turning worse, mankind should adapt itself to the new situation which has emerged in part through its own fault, he said.

Ader said that Hungary had also felt the harmful effects of climate change.

Hungary protects its water bases in vain if its neighbours fail to do the same. For this reason, it tries to prevent conflicts arising from the common use of water by concluding bilateral and multilateral agreements with its neighbours, he said.