Ante Rebić had given the visitors’ an early lead but Ádám Szalai’s low finish from a tight angle restored parity before the half-time break and Pátkai’s intervention completed a stirring comeback in front of another capacity crowd at the stadium of Hungarian league leaders Ferencváros. 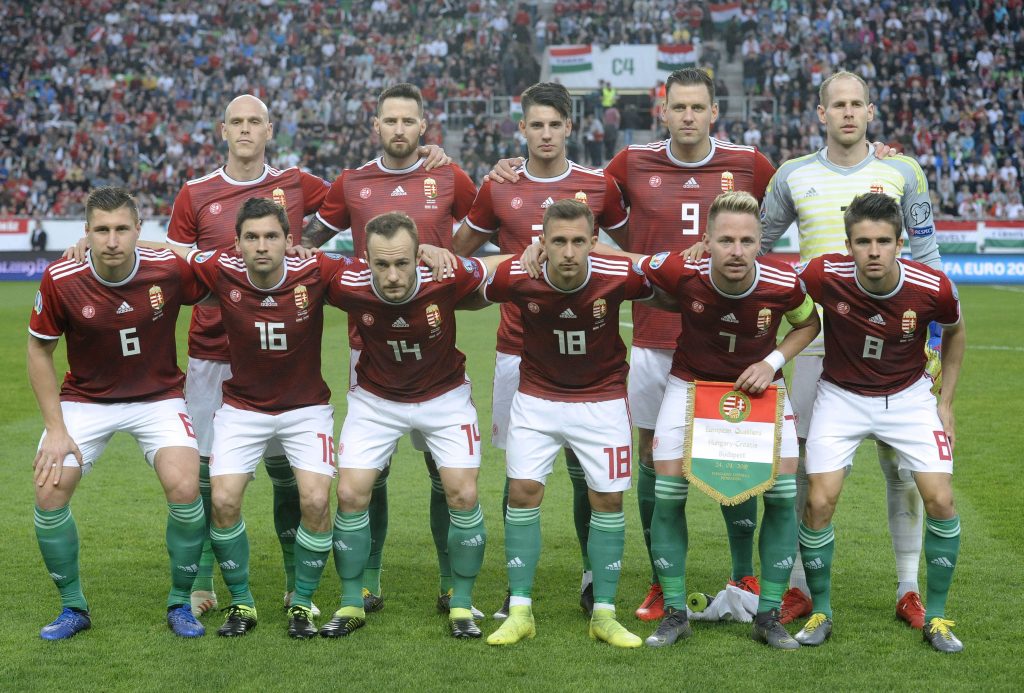 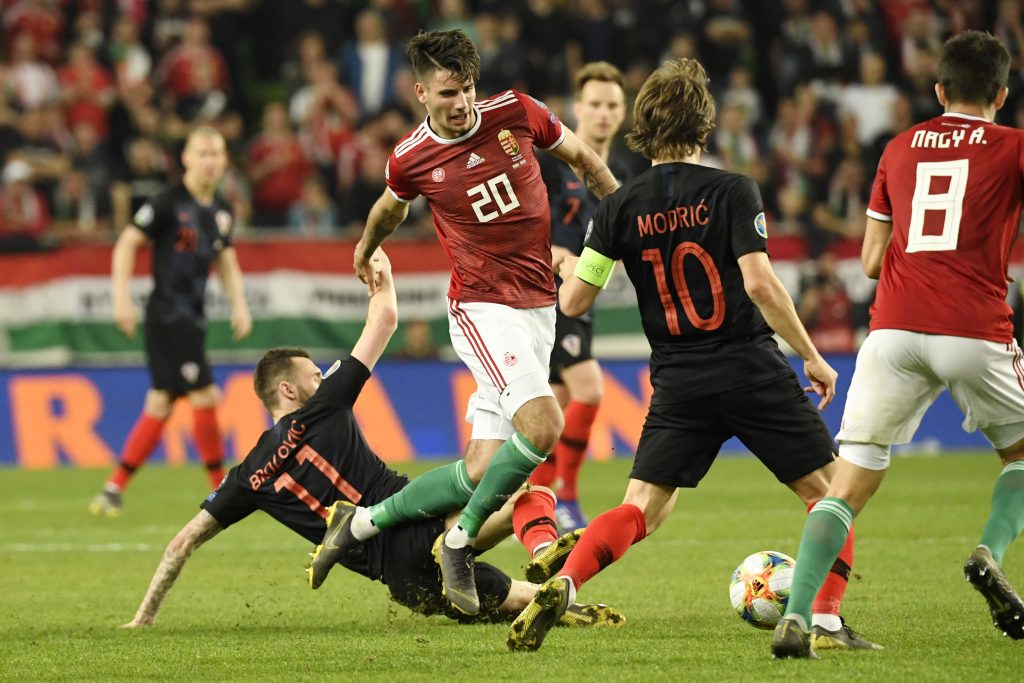 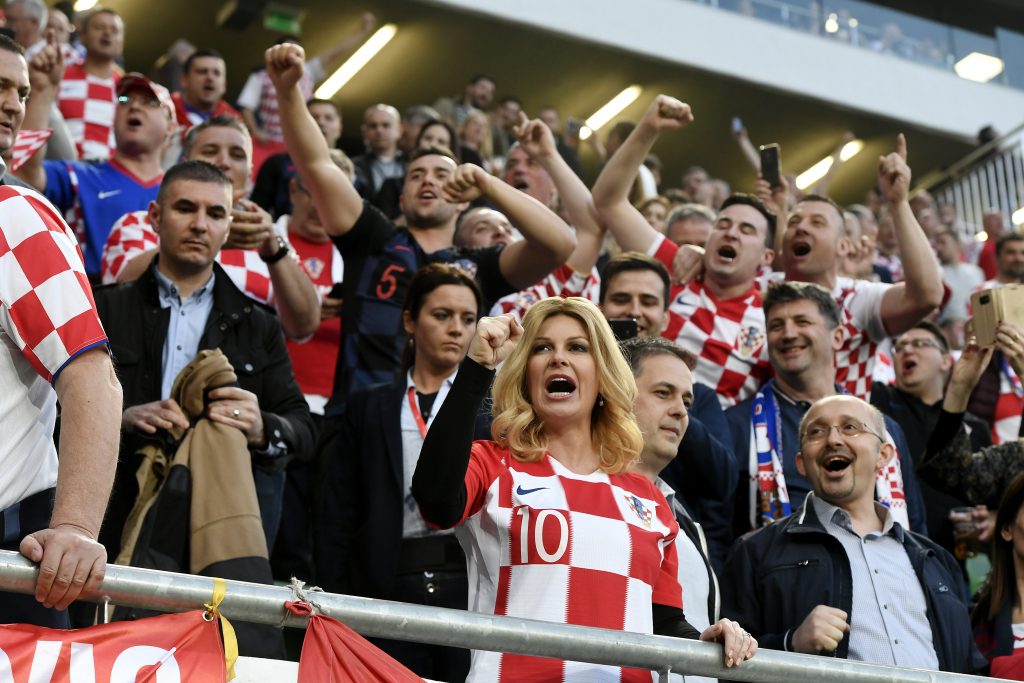 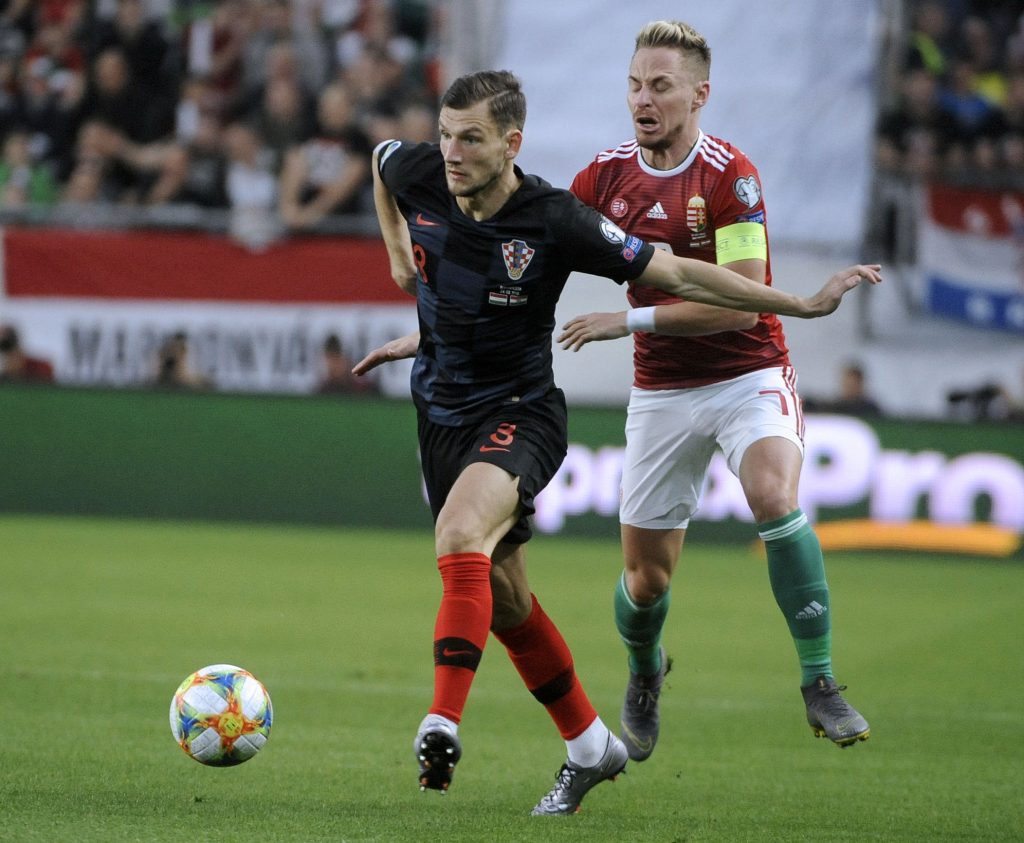 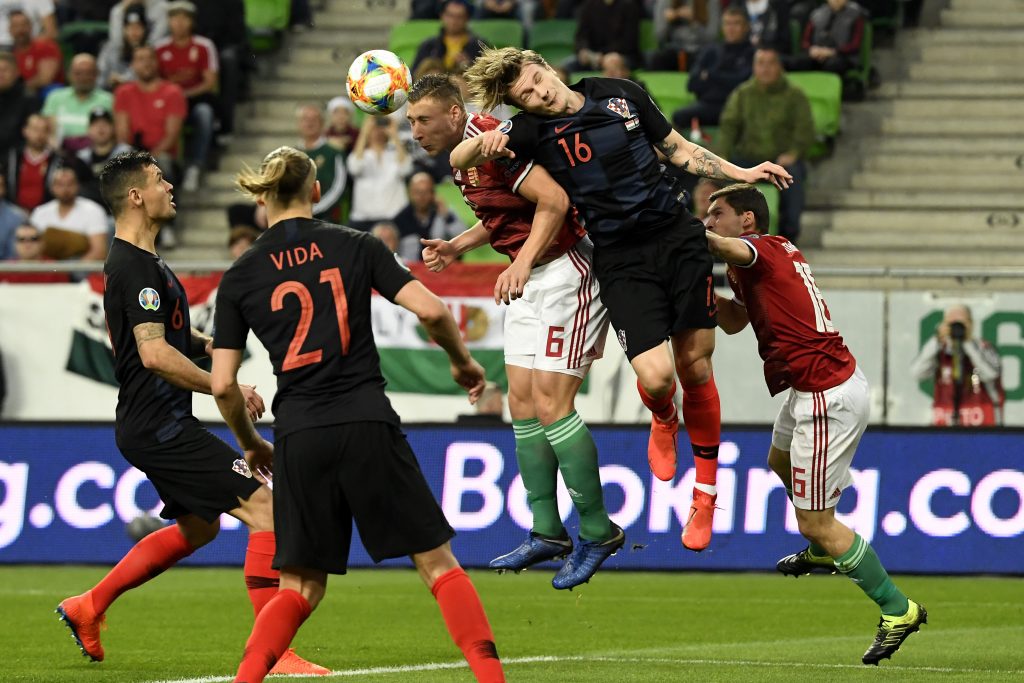 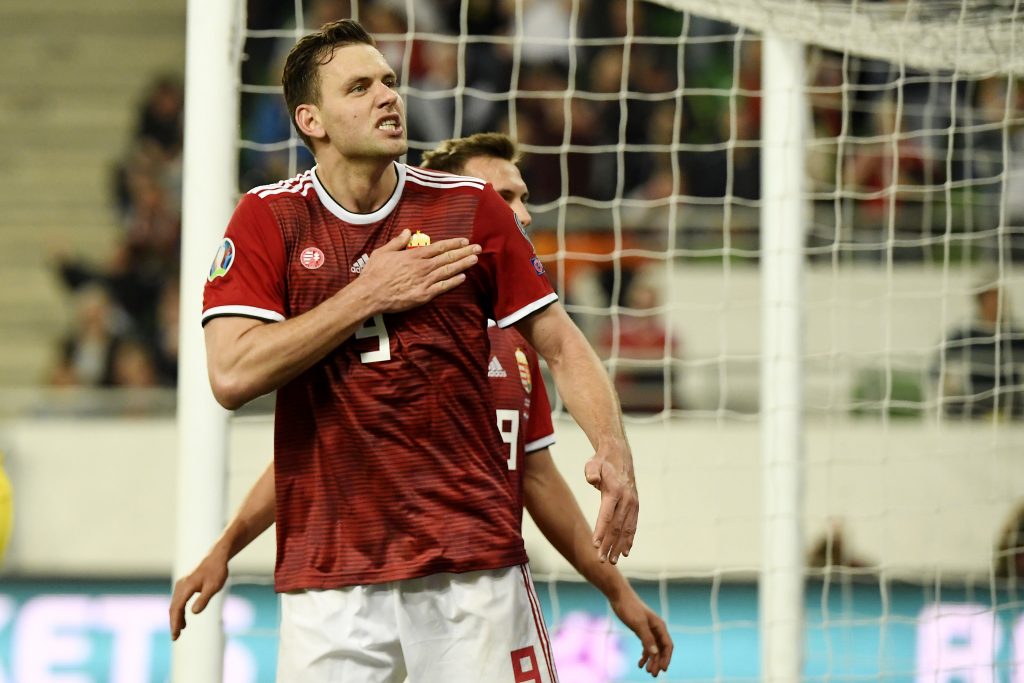 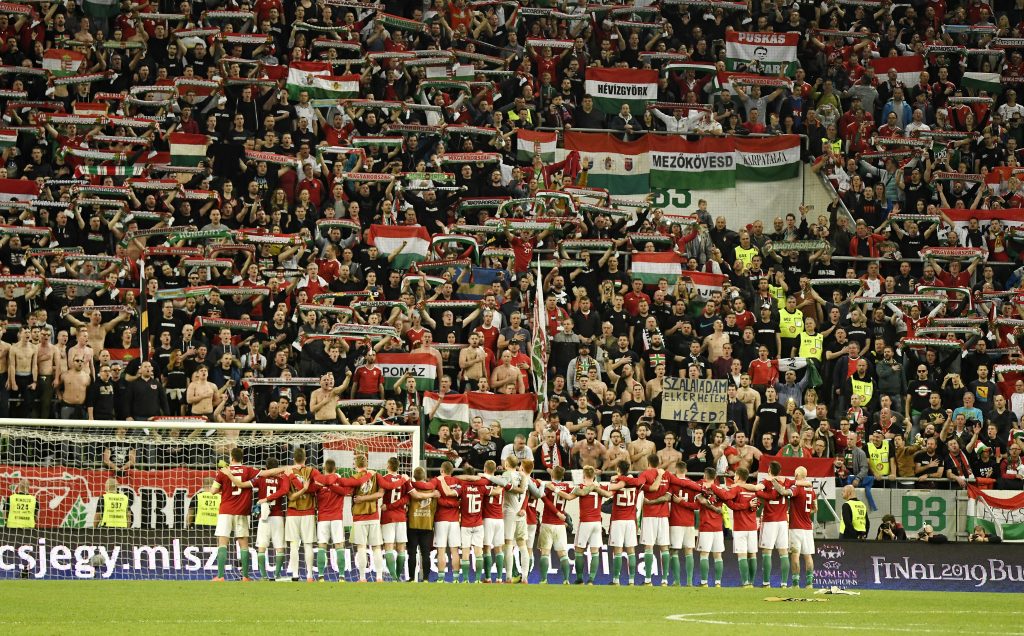 Hungary head coach Rossi opted to ring the changes after last Thursday’s 2-0 defeat away in Slovakia, the most prominent of which saw Balázs Dzsuzsák start on the right wing in his 100th appearance for the national team, an occasion marked by the gift of a framed shirt from MLSZ President Dr Sándor Csányi before the kick-off.

Botond Baráth, Máté Pátkai, Dominik Nagy and Dominik Szoboszlai were the other men to come in as the hosts lined up in a 4-2-3-1 formation against a team with three points already on the board after Croatia’s 2-1 away win over Azerbaijan three days earlier.

Perhaps Hungary paid just a little too much respect to their illustrious opponents in the first few minutes, Luka Modrić’s free-kick from the right channel being headed over by Dejan Lovren nine metres outin the fourth minute before Ivan Perisić cut inside two minutes later and unleashed a low drive which Guácsi did well to get his full body behind and gather.

In the very next passage of play, Borna Barisić’s left-wing cross evaded Botond Baráth but Andrej Kramarić could only divert the ball narrowly over the crossbar.

Back came Hungary though and a right-wing free-kick earned by Szalai, taken by Balázsi Dzsudzsák and headed back across goal by Orbán found its way to Szalai, but the Hoffenheim striker was crowded out before he could fire a shot at goal.

Hungary were giving as good as they were getting but there was always the chance of being hit on the counter-attack by this lightning-quick Croatia team. So it proved in the 13th minute when Modrić’s low right-wing cross was taken off the toes of Perisić by Kramarić and helped on to the unmarked Ante Rebic ten metres from the Hungary, the Eintracht Frankfurt forward calmly slotting the ball past Gulácsi’s outstretched left foot and into the bottom right corner of the net.

It looked an uphill struggle for the hosts to stay in the game as the 2018 FIFA World Cup silver medallists threatened to score more but to their credit, Rossi’s men composed themselves, stayed solid and gradually started to pose danger again.

This culminated in a deserved 34th-minute equaliser when neat interplay over 40 metres between Lovrencsics, Szalai and Dzsudzsák resulted in the latter feeding the ball down the central-right channel for Hungary’s lone striker to latch on to. Finally supplied with a sight of goal, Szalai rifled through Croatia goalkeeper Lovre Kalanic into the net from a narrow angle.

Almost immediately, the home team were unfortunate not to be awarded a free-kick on the edge of the area when a Croatian defender stepped on the right heel of Dominik Nagy, the Legia Warsaw winger forced to leave the pitch in agony and on a stretcher.

Ferencváros attacker Roland Varga replaced him and he was to go close to edging Hungary into the lead in first-half added time, a smart training-ground corner routine seeing captain Dzsudzák’s eventual cross half-cleared to Varga, only for his half-volley to bounce just wide of the left post.

The first 15 minutes of the second half were a very even affair but that situation was punctured by Szoboszlai’s loss of possession 30 metres from his own goal, Croatia moving the ball on well to Perisić but his shot from seven metres rolled disappointingly wide.

Croatia’s failure to convert their possession and chances into goals meant wholehearted Hungary could always harbour hopes of taking the lead and these became reality in the 76th minute when Dzsudzsák’s inswinging corner from the right was contested by Pátkai at the back post, the loose ball being gleefully hooked into the net by the Videoton midfielder a matter of metres from goal.

Rossi’s charges didn’t rest on their laurels though and an almighty scramble in Croatia’s six-yard box almost saw substutute Zsolt Kalmár double Hungary’s advantage, only for his two close-range efforts to be blocked by frantic defenders.

The visitors’ evening was summed up in added time when a Baráth clearing header fell invitingly to FIFA 2018 Player of the Year Modrić on the edge of the penalty area, but the midfield maestro could only skew a half-volley wide of Gulácsi’s right post.

The final whistle blew soon after, an ecstatic home crowd rightly lauding the players who have handed their team their first three points of the qualifying group and signalled Rossi’s squad will be right in the fight for UEFA Euro 2020 qualification.