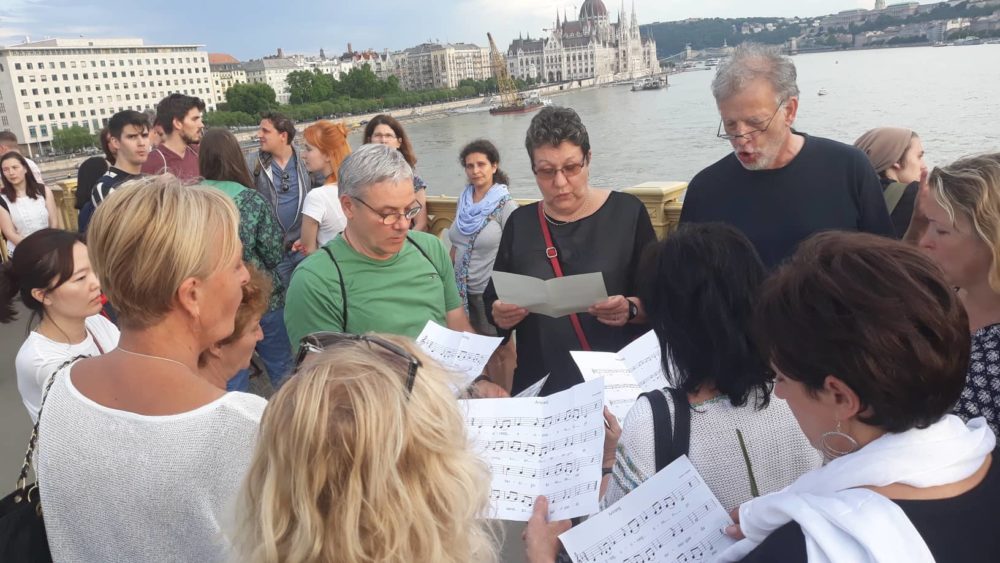 More than a hundred people gathered together around 7.00 pm on Margareth Bridge, Budapest, to commemorate the victims of the ship collision on the Danube by singing the unofficial Korean national anthem, the Arirang.

Daily News Hungary reported before that The Hungarian riverboat used for tourism capsized in Budapest, Hungary on Wednesday evening (10 PM) with 34 people on board, including passengers and crew, and a rescue effort was underway by Hungarian rescue crews.

The boat called Hableány (in English: ‘Mermaid’) capsized after being hit by another tourist vessel.  The boat was moored near the Hungarian parliament building and reportedly was hit by another tourist vessel, then turned over on the Danube, which has been flooding with strong currents following a rainstorm and heavy rain in the Hungarian capital.

In the accident, all the passengers, mainly South Korean tourists, went into the cold water.

Seven South Korean victims of Wednesday evening’s Danube ship collision have been identified on the basis of fingerprints and palm prints, the National Police Headquarters spokesman has told public news channel M1. Kristóf Gál said on Saturday that they had presented photographs to the relatives of the victims during the identification process and South Korean authorities were on hand to help.

Szeretlek Magyarország reported that the crowd gathered together on the south part of the bridge, singing Arirang which is a Korean folk song that is often considered to be the country’s unofficial national anthem. This special flash mob was organised by the Csikszerda Chore and the Kórusok Éjszakája organisation in the capital. Every participant received the lyrics and the tone of the folk song.

The collision of Hableány and Viking that took place on Wednesday evening in Budapest was a rare accident considering its severity. There were but few instances that such collisions happened in Budapest or in Hungary – the last one was almost 70 years ago – DETAILS HERE

Find more articles in the related posts below!