Sopron is among the 30 most beautiful towns in Europe – VIDEO

According to telegraph.co.uk, the Japanese tourist board has revealed which they think are the prettiest towns in Europe – and we are thrilled to report that the beautiful Hungarian city of Sopron is part of the list! The list includes scenic hilltop communes, coastal fishing villages and more from towns all around Europe.

The agents were presented with the challenge to pick the 30 best by the Japanese Association of Travel Agents (JATA), which wants to promote travel to attractive little places in Europe.

They write about Sopron that it is the site of a diplomatic picnic that helped to end communism in Eastern Europe in 1989 and that Sopron is also home to more than 300 dentists. Naturally, the city has much more faces and interesting aspects.

As sopron.hu writes, the city is situated near the western borders of Hungary, at the foot of the Alps. It is one of the oldest jewelboxes of the country. Sopron merges past and present. It creates a bridge between Hungary and its western neighbours, opening a gate for foreign guests visiting Hungary, as it is symbolized by the coat of arms of the city.

The inhabitants of the city are famed for their hospitality and their loyalty to their hometown. This is also symbolized by the ‘Gate of Faith’, which can be found on the southern side of the Firewatch Tower. The symbol of the city was made in memory of the referendum of 1921.

The curative and refreshing air of the natural environment, the hiking routes of the wooded hillsides, the view towers, the mountain springs, and the proximity of Lake Fertő make Sopron one of the most beautiful and most pleasant holiday resorts of Hungary. The Löverek, the hilly area south of the city is the most fascinating and most distinguished area of the city. It offers calm forests with spruces, oaks and chestnuts, lilies of the valley and cyclamens, hiking paths and lookout towers. 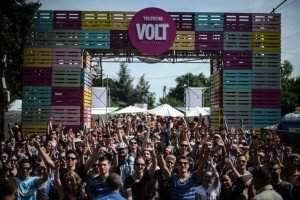 The city offers something to everybody, but probably the Telekom VOLT Festival attracts most of the tourist. This summer it is going to be held between the 29th of June and the 2nd of July. Make sure to keep an eye on the list of performers!