The demonstrators demanded that President János Áder sends the legislation to parliament or the Constitutional Court for review.

The crowd filled the western embankment of the river Danube between the Chain Bridge and Erzsébet Bridge.

The demonstrators held up the national colours or banners of the EU; others carried signs that said “Let’s stop Viktor Orbán” or wore badges with the inscription “I stand with CEU”.

Meanwhile, Szilárd Németh, deputy head of ruling Fidesz, said that the demo was organised by “agencies financed by (billionaire George) Soros” in retaliation for Fidesz’s submission of a bill concerning the transparency of organisations that receive funding from abroad. He also insisted that those “agencies” aimed to “undermine Hungary’s border protection and force the country to provide free entry to illegal immigrants”.

The protesters walked across the Chain Bridge to parliament on the Pest side. When the first protestors arrived in Kossuth Square, in front of parliament, the last ones were still leaving the starting point of the demonstration on the western embankment. The protestors completely filled Kossuth Square.

In the square, the CEU student Gábor Bródy said that making it impossible for the university to continue its operations would undermine Hungary’s reputation “in the interest of achieving dubious political goals”.

The demonstration, which was organised by a group called For the Freedom of Education, officially wound up after 7pm, but several thousand people remained in the square in front of parliament afterward. Some behaved aggressively toward police and a crew from public television news channel M1.

The demonstrators sang the national anthem together and held up the glowing screens of their mobile phones.

Some of the protestors threw bottles at the police.

At around 9pm, several thousand protesters left Kossuth Square and went to the human resources ministry, in nearby Szalay Street. They chanted “free country, free university” and “we have had enough!”. They continued to the Nagykörút ring road, blocking traffic, and headed for the headquarters of governing Fidesz in Lendvay Street, near Heroes Square. 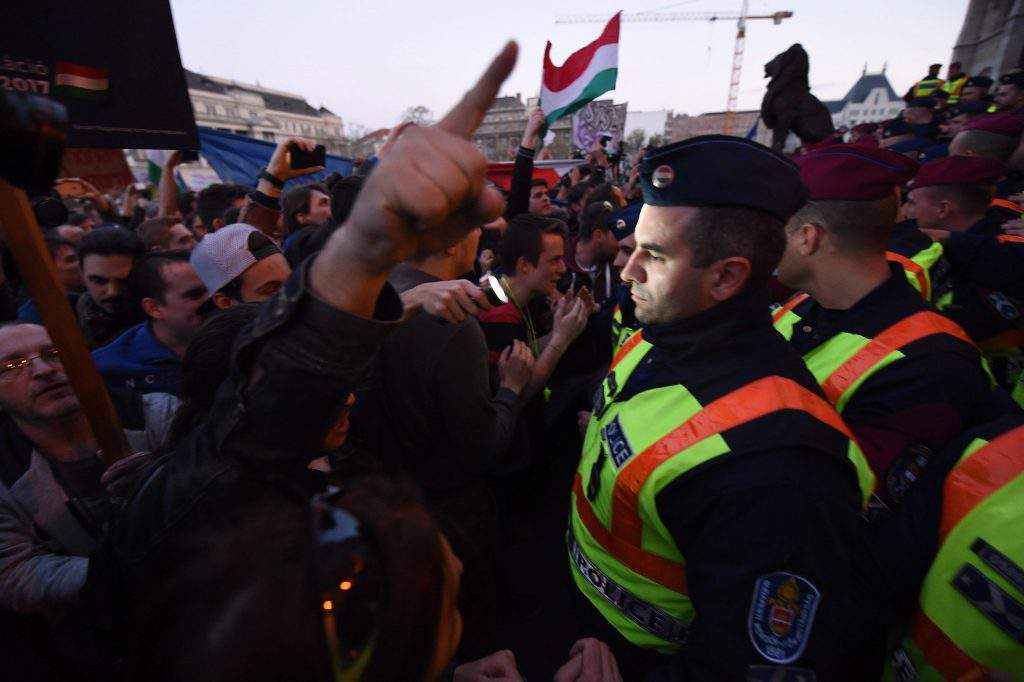