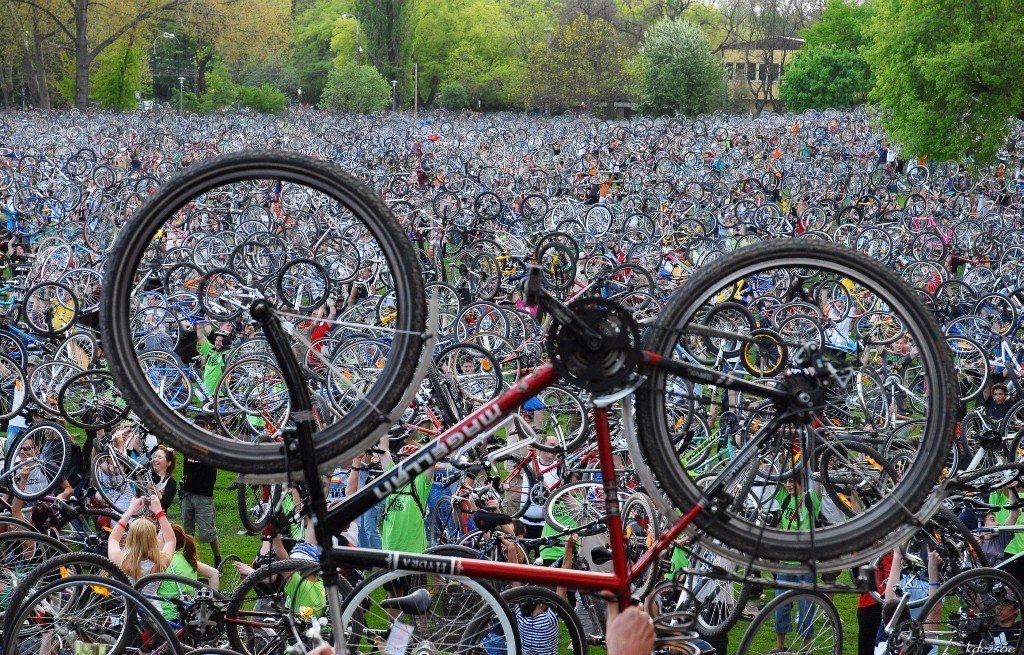 According to kerekparosklub.hu, since the Critical Mass in 2013, a lot of people said that Budapest needs a big, spring bike demonstration. It has been decided that it will be organized.

The demonstration will be held on 25 April, on Saturday. The gathering will be at 15:30 at Bakáts square. The organizer ask the participants to arrive from the Nagykörút, the Üllői street or the Ráday street because from the Közraktár street the square won’t be accessible.

Bikelifting: around 18:30 at Margit Island at Nagyrét when everyone has arrived

The route can be shortened or you can join in or stop any time. However, there is no point in stopping.

What is the purpose of the event?

The Critical Mass has started in 2004 and by 2013 it has achieved its aim: the bike transportation is popular and accepted in Budapest. They see it is needed to have a big bike demonstration. They would like to if Budapest become a bike city: that’s why they organize the I Bike Budapest.

It is necessary of the authorities of the city to support a livable city. The organizers would like that the increasing ratio of the people using bikes would correlate to the infrastructure. The organizers think that an advanced transportation system would be needed and a safe and enticing road system would be a solution for the bike users and this will be an answer for the problems of the capital city transportation system.

Also, the organizers would like to make a tradition out of this demonstration.

Who organize this event?

The event can be attended by your granny, newborn, your lover and your friends, too. The I Bike Budapest is an entertainment which follows the style of the of the Critical Mass.

The demonstration will be on closed roads. Besides the police, the event will be protected by cyclists in organizers t-shirts which will be friendly.

How can I help?

Invite your friends. Share the event on Facebook and invite your friends. Post it in your favourite groups or send a preview on your mailing lists. Let your friends know, who work in the media, to mention the I Bike Budapest event. Thousands of stickers and fliers wait to be hanged around the city.

What if the weather is bad?

We dress up. We think that cycling is not connected to weather.

What the situation with politics?

Our common case is cycling. It is a big thing that the event hasn’t been bothered by the issues of politics so we ask you not to advertise any political party or movement. Politicians can attend but we are not to be bothered by them so please do the same. Therefore, the next day we can ask them what they did for cycling.

Is there any t-shirts of I Bike Budapest?

Yes. If you buy a t-shirt, you are supporting the event.

If I live far away or not in Budapest what can I do?

If you live far away, please follow the Cyclists’ Club or the Bike Budapest discussions, where are news about gathering of people who are cycling to the event together. If there is no any in your area than invite your friend and come together. It is advisable to come earlier because a lot of people will come with train (as the members of the Hungarian Cyclists’ Club will receive 25% discount from the cyclist ticket), with Suburban Railway or car to the suburban area.

If you are not living in Budapest, there are a lot of cities where this event is organized, other Critical Mass’ events. Follow the Cyclist’s Club discussions where these event s are announced. If there is no any, come to Budapest. If you are to organize an event in your own town we gladly help with it.

Where should I share my photos, videos, and experiences?

based on article kerekparosklub.hu
translated by Andrea Toth