The Jewish 48’ers: in the American Civil War – Unearthing a forgotten heritage

While nearly all Hungarians are more or less familiar with the history of 1848/Hungary’s independence war it’s a subject that has been left out of most foreign history books. The contribution of the European Jews (not just the Hungarian ones) to Hungary’s freedom fight has been widely forgotten too.

The story of the Jewish 48’ers: who fought for the Jewish emancipation across Europe and for Hungary and for a better Europe during the Spring Revolutions of 1848 and later to make America free during the Civil War has arrived.

Their sacrifice is finally told in a colourised and educational documentary.

This forgotten part of the history is presented through the Hungarian Revolution of 1848 as that was the most meaningful event for the Jews and for all the freedom lover people of Europe in the mid-19th century. The revolution that turned into Hungary’s independence war from the Habsburg Empire was a heroic struggle in which Hungarian, German, Austrian, Czech and Polish Jews bravely fought on the Hungarian side. Jews made up 12% of the Hungarian Army, despite they numbered only 3% of Hungary’s total population. 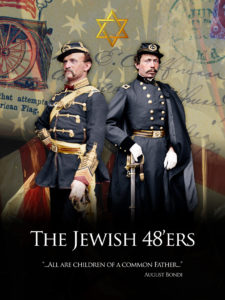 In 1849 the revolutionary movements are crushed and many of these Jews are forced to leave the old continent behind. They find a new home in the United States where they will highly contribute to its development. Many become active in the abolitionist movement too such as Michael Heilprin who was friends with Lajos Kossuth. Others such as August Bondi will fight alongside John Brown to free slaves in Kansas.

In 1861 when the civil war erupts many of the Jewish and Gentile 48’ers from Europe (especially from Hungary) will take up the arms in defence of the Union. As experienced veterans of 1848 they will form dozens of volunteer regiments and will win battles for their new country. Not many know that the Jewish 48’ers were one of the reasons of the North’s victory. Names such as Joseph Pulitzer, General Frederick Knefler and Colonel Utassy who battled against the slavery will appear in the movie.

History calls them: The Jewish 48’ers.

Raw cut from the film tells us how Major General Oliver. O Howard remembered his Jewish troops, highlighting that many were Hungarian. Watch below:

The trailer is now online too:

The documentary film will be coming out on jewishdocumentaries.info on the 7th February