The most unique street performers of Budapest 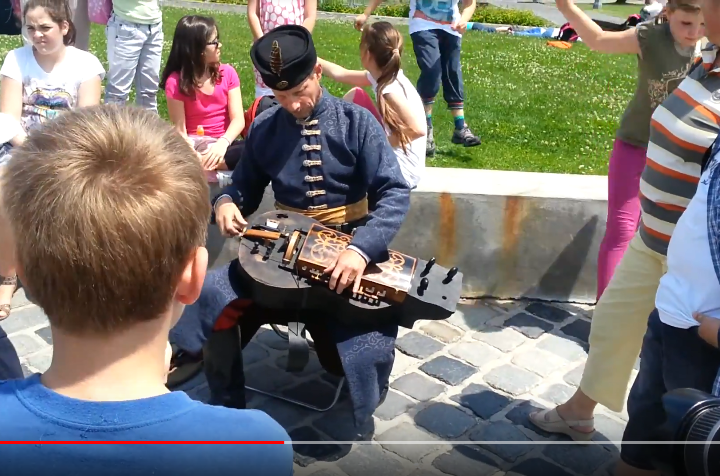 Street performers are definitely not unique to Budapest. They are all over the globe. However, there are some pretty unique performers you can only see in the Hungarian capital – musicians, magicians, and many more. You do not have to take a short trip to Budapest to see them, just check out these videos!

Hurdy-gurdy is tekelőlant or nyenyere in Hungarian, and it is an essential part of Hungarian folk music. It is a string instrument that produces sound by a hand crank-turned, rosined wheel rubbing against the strings. Its shape is similar to a cello, but it operates like a piano and sounds similar to a violin.

If you are interested to learn more about Hungarian folk music, check out our previous article on the subject:

Melodies are played on a keyboard that presses tangents—small wedges, typically made of wood—against one or more of the strings to change their pitch. The musician only needs his/her left hand to press the keyboard while the right hand turns the wheel. Like most other acoustic string instruments, it has a soundboard and hollow cavity to make the vibration of the strings audible.

On YouTube, you can find several videos of street performers playing on the hurdy-gurdy. Check them out below:

Mr Glass is no ordinary street performer. The vast majority of tourists who pass him by in downtown Budapest probably do not know that he graduated at the Liszt Academy of Music in 1992. He is not only an “official” performer, but he is also a teacher of music. He himself created his very unique instrument out of stemware glasses and a little bit of water. He plays many of the classics on his peculiar instrument, including Mozart, Bach, J. Strauss, Bizet and many other famous composers, even contemporary music. Check out his website for more information, and definitely listen to him play because HE IS INCREDIBLE.

József performed on the streets of many European cities during his studies. His art is much appreciated everywhere, as it is still considered a rarity. He told Bors Online that once he had the chance to perform right before Olivia Newton-John which was broadcasted, and hundreds of millions of people could see him play.

Do you believe in magic?

Impressive card tricks in front of the Parliament Building of Budapest:

Bence Sarkadi is a Hungarian marionette artist/puppeteer who travels around the globe, entertaining millions of people. Ha has also won several awards for his one-man-show. He started working with marionettes in 1999. He began touring with his shows in 2007, and he has performed in numerous countries including, among many others, Hungary, Greece, Belgium, Colombia, USA, Canada, UK, the Netherlands, Ukraine, Australia, Italy, Russia, Romania, Germany, Switzerland, India and even South Korea. In his show entitled The Budapest Marionettes he works with different marionettes in a cycle of short stories accompanied by music. Check out his Facebook page here.

And some street performers are simply…weirder…than others.