An anti-government demonstration started on Heroes’ Square in Budapest today afternoon, with the participants moving through Andrássy Avenue towards the Parliament building. Opposition parties called for further protests, another change of regime and building a new republic, while trade unions announced nationwide demonstrations to be held on January 19 in protest against recent amendments to the labour code.

László Kordas, head of the TU confederation MSZOSZ, said during an anti-government demonstration in Budapest that they would present a list of demands to Prime Minister Viktor Orbán on Tuesday and give five days to the government to set up a negotiating committee.

If the government fails to set up the committee by the deadline, the unions will hold a nationwide warning strike, and protesters will block roads and bridges, he said.

The trade unions are prepared for “a militant period” because the government has “made a deal with capitalists” and “chose to side with heinous profit-hunters”, he said. 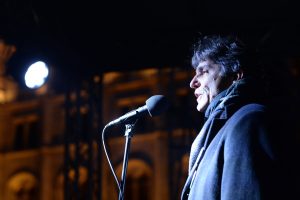 Head of the teachers’ trade union PDSZ Tamás Szűcs called for action and said there was no reason to fear from strikes because they were the only way to succeed and force those in power to back off.

PRESIDENT ÁDER SIGNS THE AMENDMENT OF THE LABOR LAW – UPDATE

Conservative opposition Jobbik spokesman Péter Jakab said a petition would be launched against the “slave law”.

Opposition DK deputy leader Csaba Molnár said even if Prime Minister Viktor Orbán backs off and withdraws the labour code amendments, they would not stop because they are “rebelling” against the entire regime not just specific laws.

Opposition LMP lawmaker Antal Csárdi said four million employees were affected by the “slave law”, so the main task was to get it withdrawn and the labour code to be revised. He called the trade unions and other opposition parties for consultations on January 9.

Opposition Párbeszed co-leader Gergely Karácsony said the government was unable to apply the dictatorial tactics of “divide and rule” against the protesters.

Liberals executive and independent lawmaker Anett Bősz said that Hungary’s rule of law and democracy would have to be restored.

The protest started from Heroes’ Square and new demonstrators joined the crowd as it was moving through the city. When the beginning of the crowd arrived in Kossuth Square near parliament, the end was at the corner of Andrássy Square and Bajcsy-Zsilinszky Road around 1.5 km away.