The engines start working, the plane starts taking off.  There are two turuls perching next to each other. They have been waiting for this journey for a long time. They can finally fly. They are looking at the city below while taking off. New York shines in beautiful lights and looks much better from above than from the ground. The turuls are facing 2 hours of travelling to arrive at the Hungarian Festival in Sarasota – this is how Mikolt Tózsa starts her report.

On one hand, the team development project of Hungarian Scouts in Exteris (KMCSSZ) explore the needs for Hungarian Scouts all over the world. On the other, the organisation helps fresh initiatives and supports them until the formation. A scout troop becomes official, it is given a name first, then a troop number. But there is a long way until this happens. They have to fit some criterions. One of them is the obligatory use of Hungarian language, to have at least 12 members and that the team leader must be a scoutmaster who has already turned 21, and, finally, to organise regular workshops with a reliable sustaining syndicate behind them.

Forming a scout troop does not happen in a day. The most important steps are designating and training the right leaders, and gathering children. Then comes the forming of the sustaining syndicate, which can be a Hungarian organisation, church, or it can consist simply of the scouts’ parents. But those who are willing to undertake this venturous task are not alone! Tamás Marshall, team development scoutmaster of KMCSSZ makes sure that everyone gets the help they need. Assistance is one of the most important parts of organising Turul journeys.

It means that the scoutmaster chooses scout leaders based on local requests. These people hold sample workshops, parent-conferences, leader trainings and different programs in a certain location. They are called Turul. Turul, as the symbol of the Hungarian conquest of the Carpathian Basin, take the new groups under their wings, and do everything to make it be the part of the homeland.

Every Hungarian community needs different kind of help. The troop in Sarasota is very new; they were formed only two years ago. Their first difficulty after the foundation was the question of raising their replacement. The Turuls (Tamás Vajtay, Csilla Tábor and Mikolt Emese Tózsa) helped them by organising recruitment. The Hungarian Festival gave a perfect possibility to reach the children and the parents. The number 9 “Jámbor Lajos” scout troop went out to the festival with two tents, where they set up a sample camp and a playground. Children were coming here from the whole area of the festival, and they definitely stopped by if they could play and win some presents.

The next difficulty for the troop in Sarasota comes from its geographical position. On one hand, the troop is far away from the other troops of their district, on the other hand its climate does not make it possible to organise summer camps. The weather is so hot in the summer here that it makes hiking and sleeping outside impossible. The troop belongs to the New York district, where the troops of Washington DC, New York, Garfield, New Brunswick, Boston and Wallingford work. The nearest scout troop is in Washington, 1,600 kilometres away from Sarasota.

The Florida scout troop is special because of its geographical and climatic traits that it is almost impossible to compare it with the other troops of the district. Whilst there are squirrels jumping on the trees in New York, there are alligators around the rivers in Sarasota. Scouting has a different nature here than Hungarian scouts are used to. As a result, KMCSSZ is thinking about forming a new district in Florida. 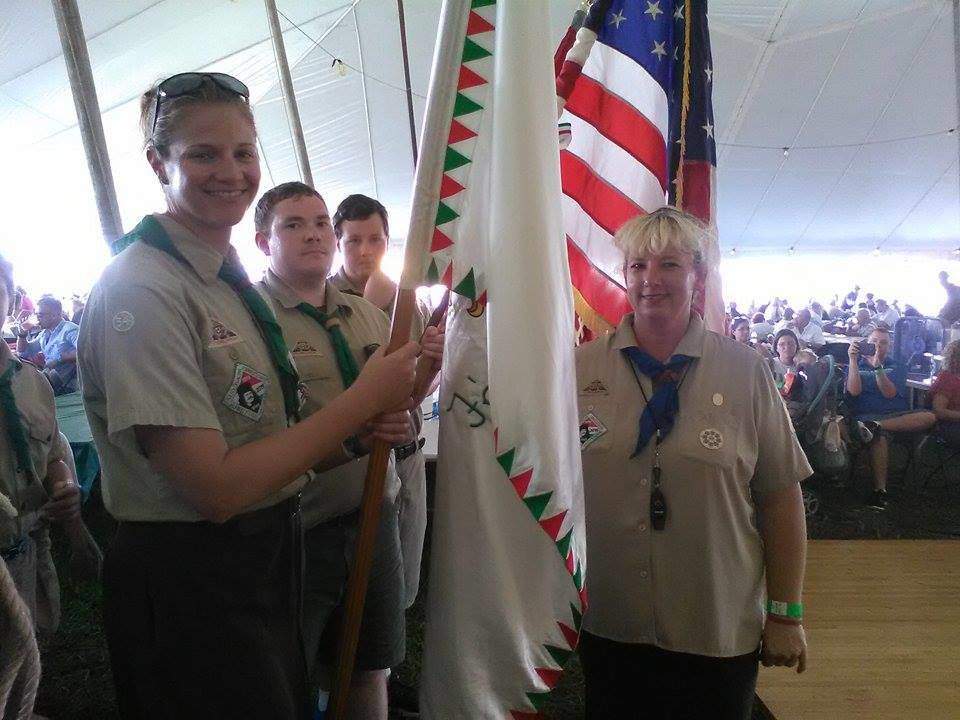 As Mikolt has a scholarship at the Kőrösi Csoma Sándor Program, she helps Marshall Tamás in the team development project in Garfield. Her task was to assess the needs for Hungarian scouting in Florida and to explore where to start new troops.

“I have looked for Hungarian organisations in Florida during my preliminary research, I used online questioners, sent invitations, shared ads, but I get real results normally by personal contacting, which I was able to do well during the festival.

I was really excited on the first day of the festival, because four people from Miami came to see me. There were a few brothers in civilians clothes, who asked about the steps of forming a troop, while the Calvinist priest had particular questions. I think that the start of the work there depends only on the agreement between the local Hungarian communities.

I concentrated mainly on Tampa on the second day of the festival, where there is no Hungarian organisation at the moment. But the parents are really interested in Hungarian Scouts. I went to visit the parents, organisations and potential scout leaders who were at the festival. We could work together with Márton György, a scholar in Florida, on this project greatly, because he is also a scout who is really motivated by the possibility of forming a scout troop in Tampa. Tampa is only 100 kilometres away from Sarasota which is important, because he could easily travel there for different events.” – says Mikolt.

The Mákvirágok Hungarian Preschool and Elementary School is operating in Orlando and there are many Hungarian children, even from Daytona. The Hungarian community, whose leader is interested in scouting, started a few years ago in Daytona. A Hungarian scout has been living here for 2 years who misses this lifestyle so much that would be happy to start a troop here.

The Hungarian Festival in Sarasota was a great possibility for KMCSSZ to reach everybody interested and motivated to form a Hungarian scout troop in Florida. The organisation of recruitment is already under process in Tampa, as they would like to hold a parents-conference and sample workshops for those interested, before Christmas.

“I am personally really motivated in creating a district in Florida. I am working on that to make it come true, and not to let it stay as just a rumour” – finishes Mikolt her report.