1956 reception in Jerusalem: Excellent Hungary-Israel ties based on common interests

Hungary and Israel’s excellent ties are based on common interests, according to diplomats attending a reception in Jerusalem to mark the 1956 revolution.

Staff of the Hungarian Embassy in Tel Aviv travelled to Jerusalem to attend the event alongside prominent Israeli politicians, public figures and representatives of the local Hungarian community.

Reuven Rivlin, Israel’s former president, told MTI’s correspondent at the event that he attached “great importance to the fight against anti-Semitism in Europe and Hungary”. He said Hungary had made progress in this area. “But there is still work to be done,” he added.

Could 36 percent of Hungary’s adult population be considered anti-Semitic?

Hungarian Ambassador Levente Benkő said the Old City of Jerusalem was an apt venue for the occasion, being the city of the three monotheistic religions.

“We’re hosting the reception here for the first time — but not the last,” he said, noting Hungary had been the first European country to open a trade and diplomatic mission in the city to further develop rapidly developing economic ties.

Benkő highlighted the “important strategic alliance” between Hungary and Israel, saying Hungary could count on Israel as the most secure point in the Middle East.

Hundreds of thousands of Hungarians fled oppression after the 1956 revolution and about 20,000 settled in Israel, he noted.

Omer Bar-Lev, Minister of Homeland Security, represented the Israeli government at the event. 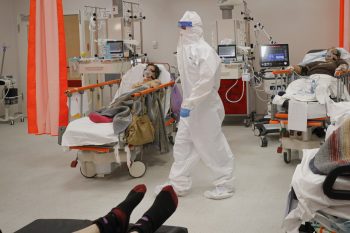 Read alsoRomanian president thanks Hungary for aid against Covid