Opposition Budapest assembly representatives have highlighted the risks involved in a plan to build a mobile levee on the Danube in northern Budapest. They also objected to the method of financing the project to revamp the city’s crumbling third metro line.

Opposition parties and civil groups have long campaigned against plans to build a mobile flood levee on the Római embankment, which environmentalists say would harm the local ecology.

Green opposition LMP’s Antal Csárdi told a news conference ahead of today’s assembly meeting that the flood protection plans were “shockingly risky”. He said he would propose postponing the decision in order “to protect lives and property as much as the trees”.

Csaba Horváth of the Socialists proposed holding a local referendum on the levee.

Dialogue’s Gergely Karácsony said that the levee proposal before the assembly “badly underestimates” the number of trees to be felled. Further, the method of flood protection right on the riverbank “is far more risky” than other methods, he added. 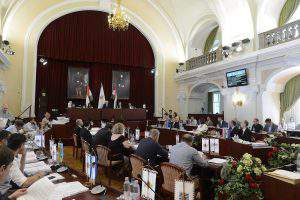 Concerning relations between the central government and the metropolitan council, Jobbik representative Marcell Tokody said that the government “has given up on Budapest and is preparing to make the next city administration’s work as difficult as possible” while keeping the city dependent on it financially.

Meanwhile, the Socialists said they would propose moving the Liget Project to the brown field site behind Nyugati railway station to preserve the City Park, Horváth said.

Horváth also called on Mayor István Tarlós to account for the source of funding for the metro line 3 renovation, saying that the city should request government funding in light of the fact that Budapest residents contribute billions of forints to the state’s coffers. Horváth said the recent announcement to sell the metropolitan authority’s “Bálna” high-end shopping centre in order to contribute financing to the metro project “shows incompetence”.

The assembly voted to build the levee along the Danube embankment and instructed Tarlós to arrange for the launch of the necessary licensing procedures. Tarlos said some 5 or 6 professional opinions have already been sought regarding the project. He said “there is no time to wait”, and a solution was needed as soon as possible. Even the civil campaigners are divided about what they want, Tarlós said, adding that the mobile levee had opponents but also supporters.

According to the latest proposal voted for by assembly, the number of trees that need to be felled to accommodate the levee has been reduced to 480, including 40 that were diseased. A total of 78 trees in the area affected are suitable to be moved, the report said. The levee will be a total of 8,169 metres long and along some stretches a half-metre tall concrete wall will be built. Several playgrounds and rest areas will be built along the embankment and the design of catering units — the site is a popular place for eating out — will be streamlined.