Easter is one of the most important celebrations in Christian countries. We’ve previously published an article about Hungary’s beautiful variation of different folkways and traditions that are connected to this festivity. Easter Sunday is dominated by traditions connected to religious ceremonies, while Easter Monday is the time for family get-togethers and folkways. But did you know that many superstitions can also be connected to Easter? Nlcafe.hu collected some of these superstitions and we wanted to share them with you!

People have always been attracted by magical imponderables so it’s no surprise that different superstitions and beliefs ended up being associated with them. Superstitions are not always accompanied by negative feelings; indeed, people frequently hope that their fate would change for the better with certain rituals.

Let’s go on with superstitions connected to Easter celebrations. The 40 day fast is the preparation for purgation and salvation. The Holy Week, before the celebration, starts with Palm Sunday, when Jesus stepped across the gate of Jerusalem according to the Bible. As tradition has it, it is prohibited to work on Palm Sunday; however jollities are permitted all the more. Planting flowers doesn’t count as work and according to superstition, if you sow seeds on Palm Sunday, your flowers will be much more scented than others’.

The magical spring catkin is also girdled with many superstitions. For instance, Greeks believe that if they put it into the spout of the gutter, it will protect them from lightning. The blessed Easter catkin is thought to have curing powers. It is believed that if you swallow a piece of catkin when getting out of the church, then you’ll be protected from stomach issues and sore throat. And if Easter falls into March, then it is not rewarding to lend it to someone.

See our photo gallery of how Easter traditions look like in Hungary!

Easter wouldn’t be Easter without Easter eggs. Traditions have it that the giving of colourfully painted eggs represents resurrection and the revival of life. Nlcafe.hu finds it interesting that they also connect the four elements to the eggs representing a new life: the egg shell represents the earth element, the inner skin is the element of air, and the egg white is water, while the egg yolk is fire. 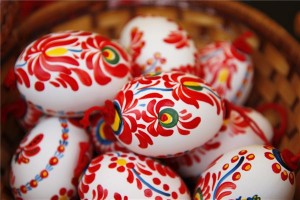 Read about the most special Hungarian Easter egg here!

The following superstitions are connected to the blessing of the food. It is still a practiced tradition in the Catholic Church, even though it originates from the 10th century. If there are leftovers from the Easter feast then you don’t have to worry about them anymore since it is believed that leftover food have magical powers. In former times, they hung the bones of the blessed Easter ham onto fruit trees because they believed that this would bring them a wealthy harvest. They gave the crumbs of the Easter milk-loaf to the hens so that they would lay many eggs. One blessed egg was eaten by two people so that if they got lost they would remember who they had eaten the egg with.

Lastly, as we’ve previously mentioned the sprinkling of girls, we want to share with you a poem that you can use if you happen to go sprinkling. Sprinkling originates from the ancient rite of fertility and purgation. In former times, men used to go from house to house to drag out young girls and pour them with a bucket of water. Sprinkling is very popular even nowadays, although in a gentler form: boys and men sprinkle the girls with cologne generally; however in the countryside, sprinkling with cold well-water is still common.

Down below you can read probably the most popular sprinkler poem:

“Wandering through the woods nearby,
A lonely daisy caught my eye.
Without rain she seemed to wither,
So I’d thought I’d bring my sprinkler.”

Read more about sprinkling and other Hungarian Easter traditions HERE!!