EP Elections – LMP: We Must Focus On Showing Alternative To Current Regime

Budapest, April 26 (MTI) – The green opposition LMP party must in the next four years focus on showing Hungarians that there is an alternative to the current regime represented by Prime Minister Viktor Orban, party leader Andras Schiffer said today. 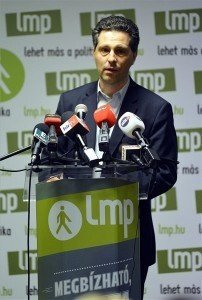 Schiffer told his party’s 28th congress in Budapest that LMP should not pay attention to its opponents and their “attempts at courtship.” The party will have its own candidate for Budapest mayor but the real challenge will be to be present at as many locations around Hungary as possible, he added.

Those who tried to force LMP to give up its mission bear serious and historical responsibility for the two-thirds victory of ruling Fidesz, he said.

He said that without LMP, the government could not be replaced even in 2018. If LMP cannot offer an alternative to radical national Jobbik and the “system of national cynicism” then nobody else will.

The “unity that cannot replace the government” has proven a failure and it has become clear that their strategy does not work, he added.