Ferencváros have sealed their 30th Hungarian league title without kicking a ball, thanks to runner-up team and reigning champions MOL Vidi FC’s draw at home to struggling Puskás Akadémia. Daily News Hungary’s report on the match.

They won even before the kick-off whistle

In fact, the Hungarian professional league for football clubs contains 33 rounds; however, it was already known even before yesterday’s 30th round that Ferencváros can easily acquire its

30th cup in the History of the championship.

For this, it would have been enough for Ferencváros to win or for the runner-up Vidi to lose on Saturday. In fact, Marko Nikolic’s Vidi had won every home league fixture since Diosgyőr defeated them over two months ago but they dropped two crucial points in a 1-1 draw at home earlier on Saturday afternoon, Georgi Milanov’s 54th-minute penalty conversion being cancelled out by Ádám Kovácsik’s unfortunate 84th-minute own goal. Therefore, Ferencváros already knew yesterday evening that regardless of the result they are the winner of the Hungarian Cup.

Probably this is what made them a bit passive: at the beginning of the match, they showed no sign of the aggressive game they played during the weeks before. Even though

in the last eight matches they found themselves in a subordinate role against Honvéd yesterday. All the same, Honvéd did not have a real chance to score a goal until the 36th minute when Eke Uzoma managed to kick one.

In the second halftime, the game accelerated and even Ferencváros’s manager Szerhij Rebrov managed to shake up his team. As a result, the green-whites were able to equalize twice but Honvéd’s Ben Hatira scored the winning goal in the 72nd minute. Though Ferencváros tried hard even in the final minutes of the match they could not equalize again.

Since Honvéd’s stadium is currently being renovated the match was played in MTK Budapest’s New Nándor Hideguti Stadium inaugurated in 2016 October. Ferencváros and Honvéd are also well-known for their huge and enthusiastic fan teams who prepared for yesterday’s match and created a genuine football atmosphere worthy for a so to speak cup final. 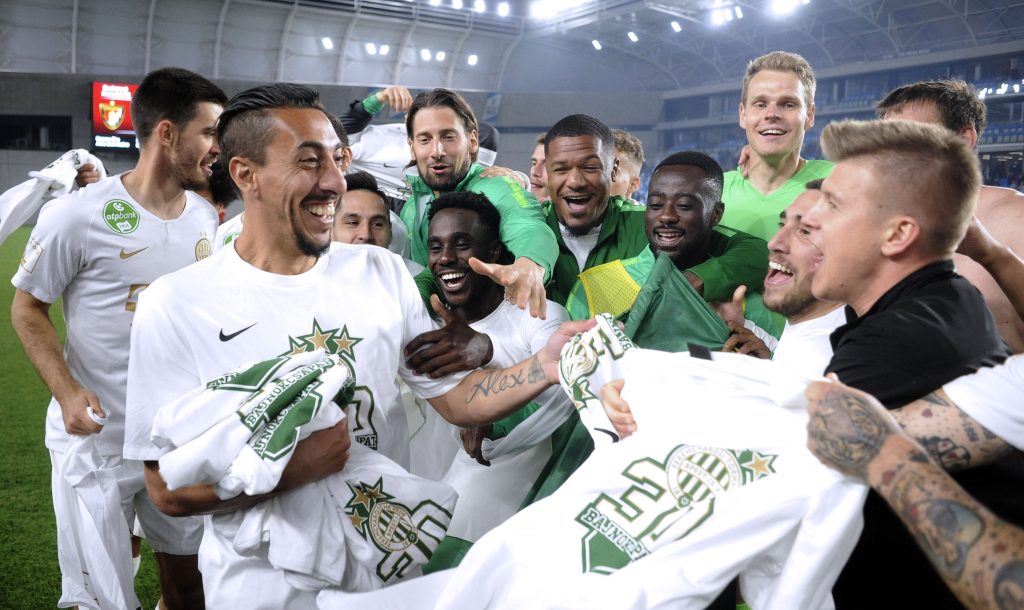 Using pyrotechnic devices is, in theory, forbidden in the Hungarian stadiums but, in practice, it is used many times. Therefore, it is not surprising that both teams covered MTK’s new stadium into smoke at the beginning of the match. Afterwards, they were supporting tirelessly the struggle of their favourites during the whole game.

Interestingly, both teams celebrated after the match together with their fans. Ferencváros was happy for their new cup while Honvéd was joyful too since they defeated the champion.

According to mlsz.hu, Hungary’s most successful club were 11 points ahead of second-placed MOL Vidi FC with four games to play after head coach Serhiy Rebrov had masterminded eight consecutive wins since defeat to Debrecen in late February.

This relentless run of good form has now culminated in the OTP Bank Liga title being regained after a two-year hiatus.

Ironically the last team to topple Ferencváros as national champions in 2017 were Honvéd.