According to origo.hu, Hungarian wines participate at international competitions with better and better result every year. This year, furmint, szamorodni and aszú were the most successful Hungarian wines.

Two wines from the Szent Tamás Vineyards & Winery won gold medals at the German Mundus Vini 2017 international wine competition. The 2013 furmint from the Szent Tamás vineyard also won the “Best of show” prize, which means that it represents the highest quality in its category. It’s a structured, mineral dry white wine of full body which features the flavour marks of oak barrels.

The other winner wine of the Szent Tamás Winery is the 2013 szamorodni. Besides the complex structure, exuberant fruitiness and exemplary richness of flavour, the jury also appreciated its diverse acid structure.

“Complexity and quality – this is why the sweet wines of Tokaj are beloved all over the world. 2013 was a very prosperous year for the szamorodni, which is starting to re-enter the international market” said Tamás Nagy from the winery.

These are not the winery’s first beverages that get acknowledged: their wines are used in the London Master of Wine Institution’s courses to introduce students to furmint, while the Las Vegas MGM Grand Hotel’s wine of the house is also from the Szent Tamás Vineyards & Winery.

The jury of one of the world’s most illustrious wine competitions awarded Figula Winery’s 2015 Sóskút Riesling, Varga Winery’s 2015 Aranymetszés, Pajzos’s 2006 five puttonyos (the unit given to denote the level of sugar and hence the sweetness of Hungarian Tokaj dessert wines) Tokaj aszú and two of Grand Tokaj’s 2013 aszú. 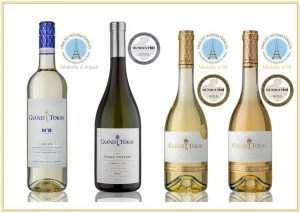