Legendary soccer Buzanszky was laid to rest in a funeral ceremony

Budapest, January 30 (MTI) – Legendary soccer player Jeno Buzanszky, the last surviving member of Hungary’s Golden Team of the 1950s, was laid to rest in a funeral ceremony in Budapest on Friday. 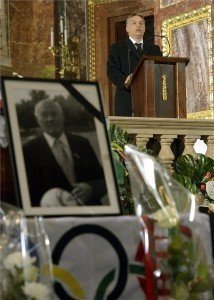 “With every of his deeds he sought to give happiness to his country, and let us here and now thank him for this,” Orban said.

The right back the Golden Team, Buzanszky made his debut in the national eleven in 1951 and remained on it for 48 selected matches up until 1956. In the Golden Team he played shoulder-to-shoulder with such greats as Ferenc Puskas, Jozsef Bozsik, Nandor Hidegkuti and Sandor Kocsis. This was the side that triumphed in the 1952 Olympic Games, beat Italy 3:0 in the first game ever played at Rome’s Olympic Stadium, and won a stunning 6:3 victory against England at Wembley Stadium in November 1953, which made it the first non-British team to ever defeat the masters of soccer on their home turf. The return match — a 7:1 win for the Golden Team in Budapest the following year — was icing on the cake. The winning streak came to an end in the 1954 World Cup final when Hungary, the hot favourite, lost 3:2 to West Germany.

“My life went where the ball rolled,” he said in the MTI interview.